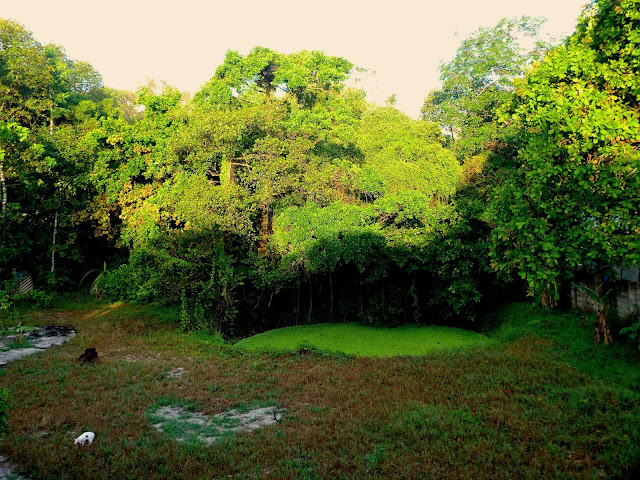 Is it the clean air being washed by the rains of the monsoon during the last weeks? Now after the clouds traveled somewhere the morning light appears in a very unique way. When morning has broken, when the sun rises, when the first beam reach the top of the trees of our sacred Kavu behind the pond and beside the 2 tree  goddesses … what is going on? Golden light is splinkled on the leaves of the top of the trees, is spread in the air, while everything below lays in the shadow. Every such morning is a wonderful miracle and fullfills us with joy … 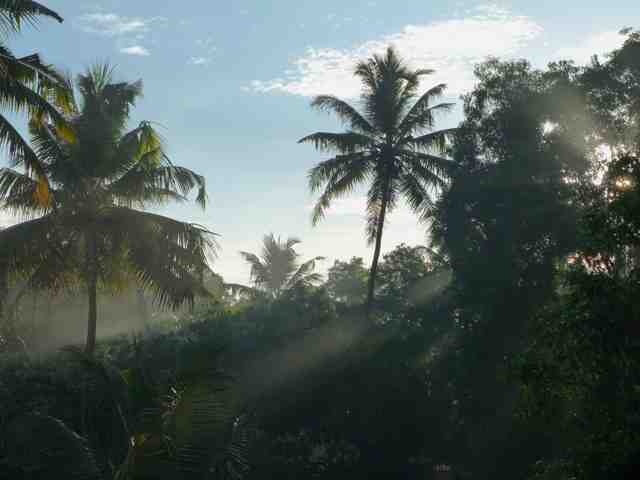 This morning was very special. May be, because I am having a fever since six days going through inner processes …? This morning I opened my arms and sang: Morning has broken … The world famous song from Cat Stevens, which was in all our ears in the seventies when I was a joung girl.
We are thankful for this place which we can share with others …

Posted by Sylviander House at 05:04 No comments:

Email ThisBlogThis!Share to TwitterShare to FacebookShare to Pinterest
Labels: nature 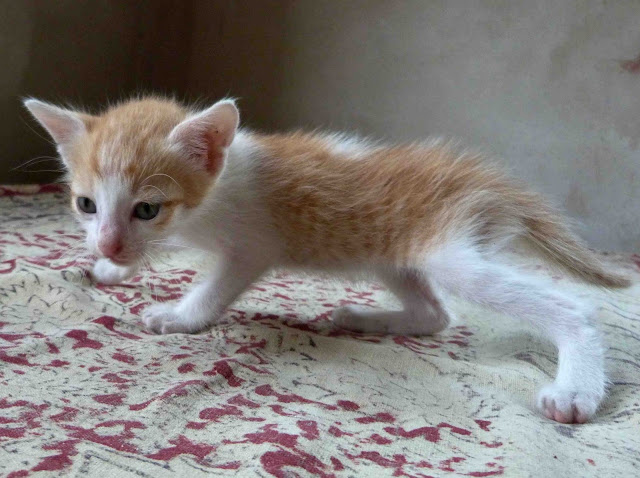 In the afternoon of 23.March 2015 I heared a kitten crying once in a while somewhere outside for hours. Thinking, this was a kitten from the neighborhood, I didn‘t mind. But since it went on so painfully, I had a look later from the verandah. Down in our garden I saw a reddish fur beside the fence on the north side of the Sylviander House. This must be the red one of Bianca‘s 3 kitten, I assumed and rushed down to get him back. Happy to be safe, he didn‘t refuse. In the kitchen I gave him some milk with the pipette, with which I fed Moojoo when she was very small and Bianca didn‘t come for hours to feed her. 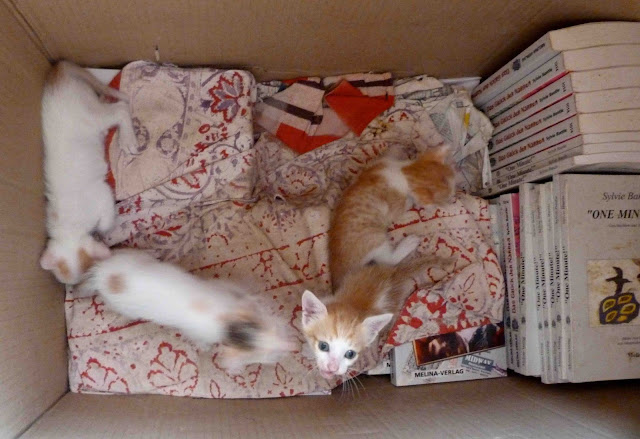 Then I brought him upstairs to put him back into the box. But what a surprise!There were the 3 kitten peacefully sleeping and in my hands a 4th one, exactly the copy of Biancas red son. What shall I do? Of course I put him to the others, hoping Bianca would accept him. She did. When she came, she looked a bit wondering, smelled at this new kitten, then started immediately to clean him. Finally 4 kitten were laying beside her and drinking, sometimes struggeling and fighting for the best place. I think she was happy, she had lost so many of her kitten, eaten by dogs, crows, tree dogs and male cats. 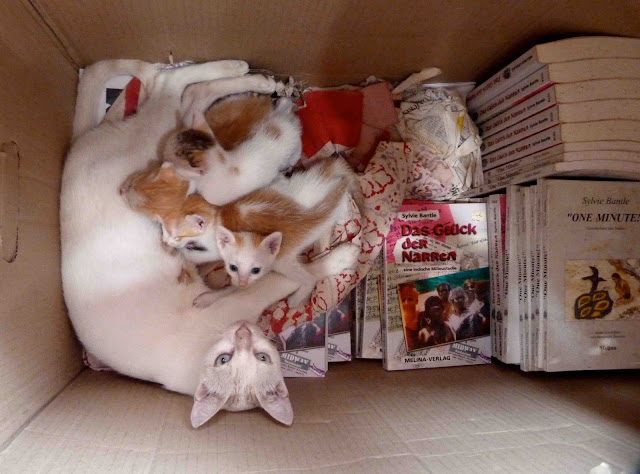 This new kitten was very different to the others. Whenever I passed the box and had a look, this foundling didn‘t sleep. He was sitting in the box, looking up as waiting for me. That moment he saw me, he screamed: Let me out! And then jumped towards me. I took him and let him sleep on my lap while I did my writing works. When Bianca didn‘t come for a long time, he was hungry, expressing by crying, until I gave him milk with the pipette, which he sucked eagerly. He needed this extra milk, since he was very skinny and a bit smaller than the other 3. 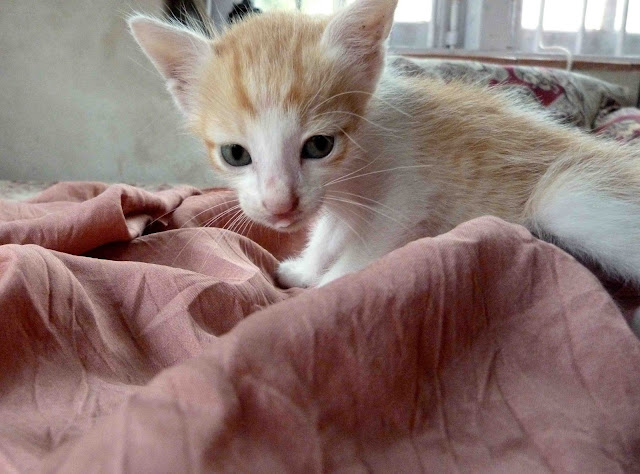 When I told these news to my german friend Silvia, who lives in Delhi, she was deeply touched seeming to recognize her former cat boy and said: this must be my Leo! Her Leo was a hungry noisy brat too!
So I called him Leo. Due to the fact that he reacted immediately on his name and showed all the described characteristics, I also strangely felt it was this Leo, now reborn in Kerala. When I tried to find out the difference of the two red boys, I found a significant one. Leo had a small white spot on his forehead, the other one‘s was big. 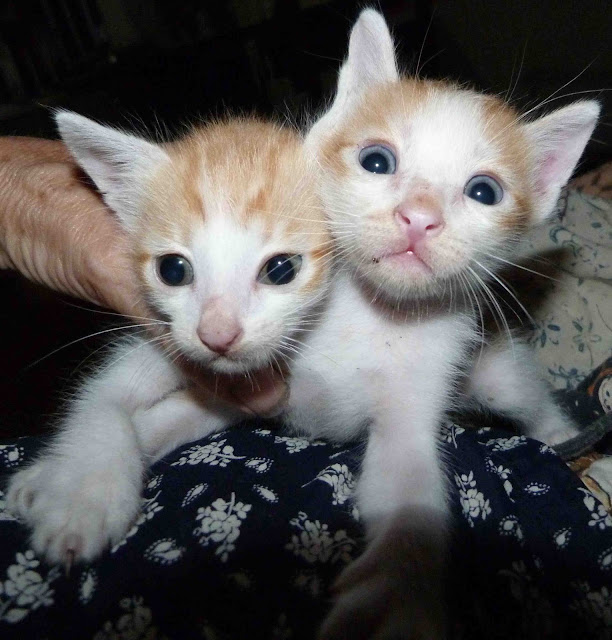 Leo was always hungry and since he was so tiny and skinny I gave him extra milk which he learned to drink soon from a bowl. He also learned very quickly to use the cat toilet, which I put in the studio – the other 3 refused, used instead the seam of our mosquito net and some corner of our room. 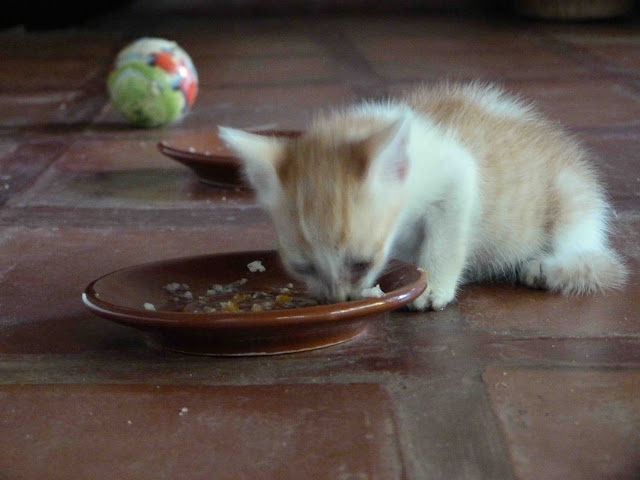 One day I saw how Leo was eating a dead gecko, I understood he needs now real food. I started to give him rice with curd, which he was eating like crazy and soon I gave him rice with mashed fish, which drove him mad of happiness … 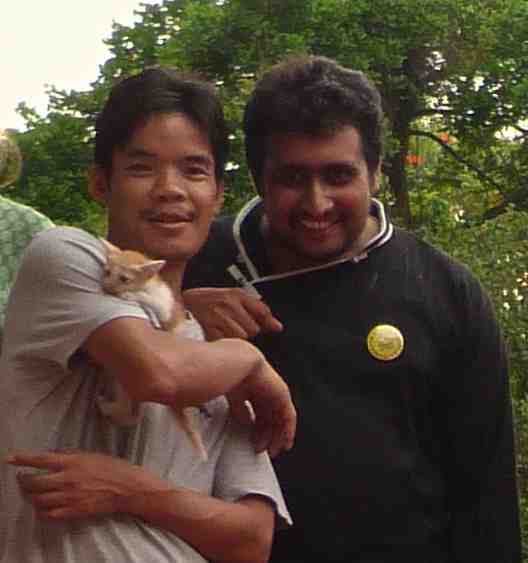 During the Tibetan Medical Camp he was the darling of the Tibetan team, while the other 3 were shy and full of fear.
Sometimes when I came to the studio, he was sitting infront of the door as he was waiting for me, then he ran to me screaming until I took him and let him play and sleep on my lap. This Leo-Meeyoo is really special. 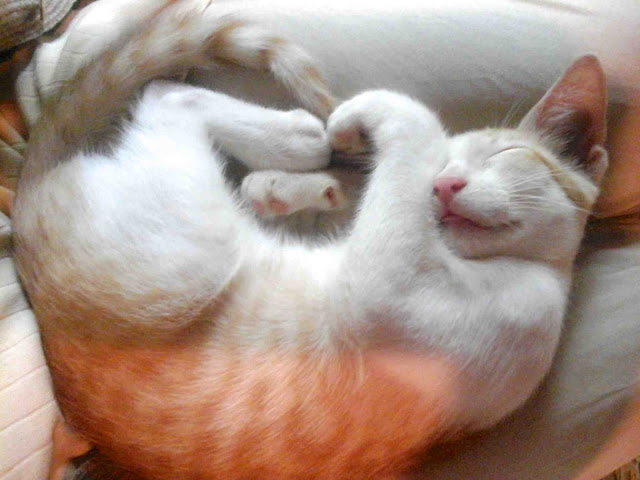 After many weeks of Moojoo‘s jealousy meanwhile she started caring for him like a mother, also Simba cared him a lot. And soon it was clear, Leo will be our 3rd member of the cat family, since he always was very close to us. 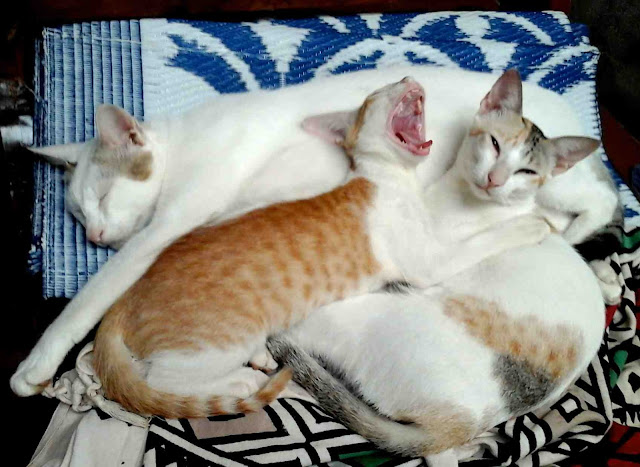 It is said, cats decide with whom they want to live. Leo from the first days he really wished to be a part of our family and we are very happy with him. 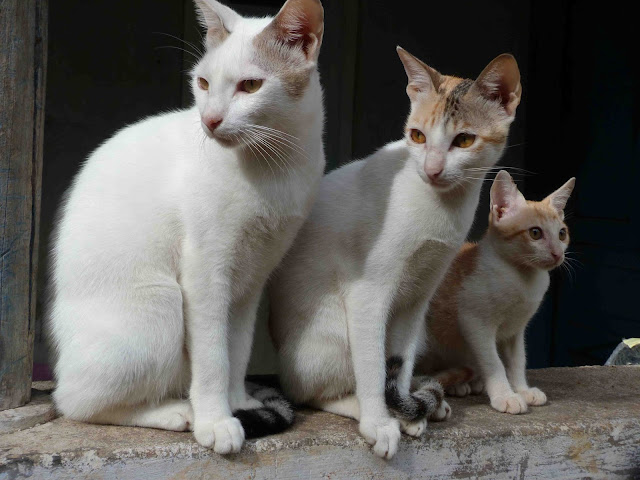 Posted by Sylviander House at 23:34 No comments:

Time for the Traditional Kerala Massage

Yesterday on July 17th, Karkidakam Maasam has started and punctually the rain has arrived. 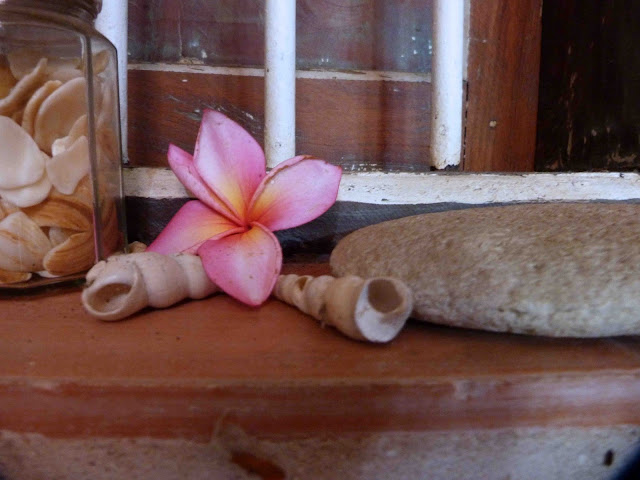 What is going to happen in nature, namely being cleaned by the rain water, it is fit for physical use to detox the body. That‘s why Karkidakam is considered to be the best time for having a Thirumal, the traditional Kerala massage.
Since during this time in Europe is summer, most of our guests will come between October to March, many of them enjoy massage too. 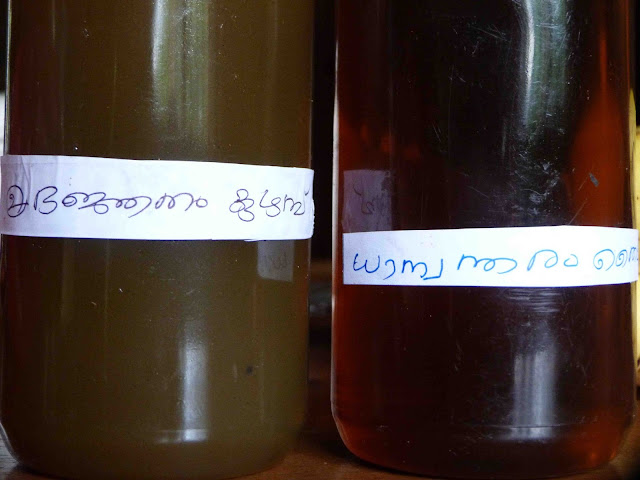 As every year my massage started yesterday. For around 2 weeks, Lilama will come every morning to our Sylviander House, where in our massage room with attached bathroom she will give me a massage with a mixture of 2 ayurvedic oils, home made by an ayurveda family in the mountains of Kerala. 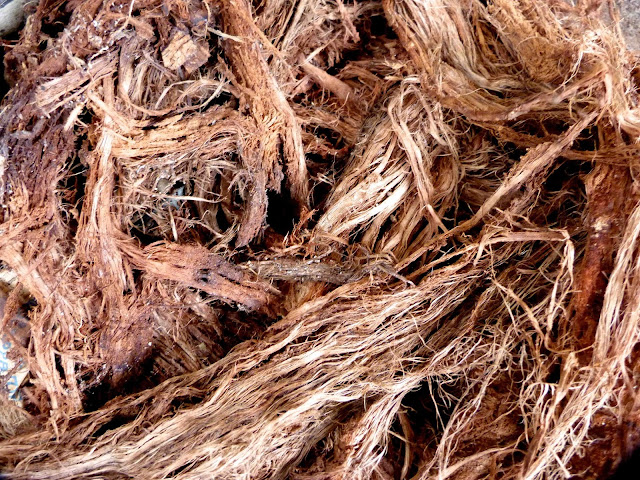 Afterwards she will rub me with a natural fibre and wash me like a small child with hot medicinal water. 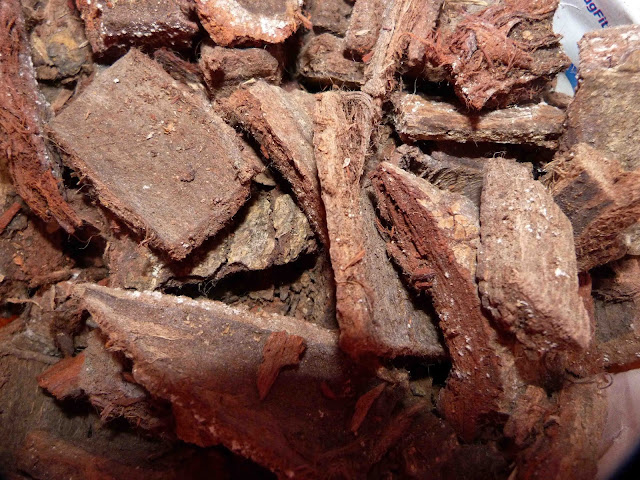 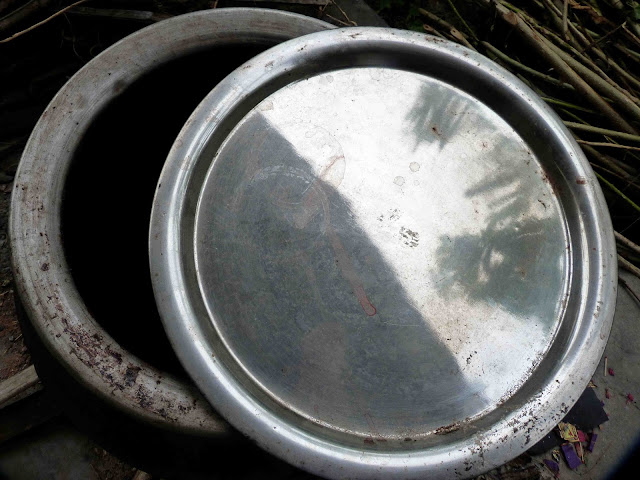 On the first day during the massage already water flows out of my pores, which makes Lilama happy, saying: Velam! Water! This is how detoxification works and that‘s why the medicinal bath afterwards with rubbing the skin is so important …
The benefit of this treatment I could feal already straight after. I was relaxed and fell asleep for some time, a very homely feeling while the rains outside create a cooling melody … 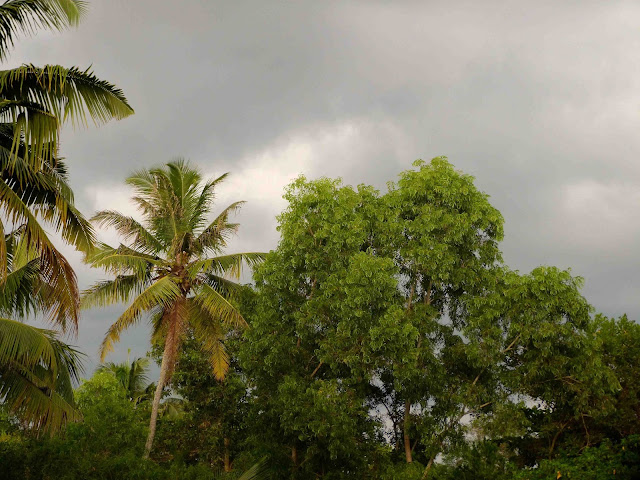 Suffering from arthritis, which often ruins my sleep, this Thirumal so lovingly practised by Lilama repairs my troubled nerves and bring back a deep sleep like a baby full of dreams … 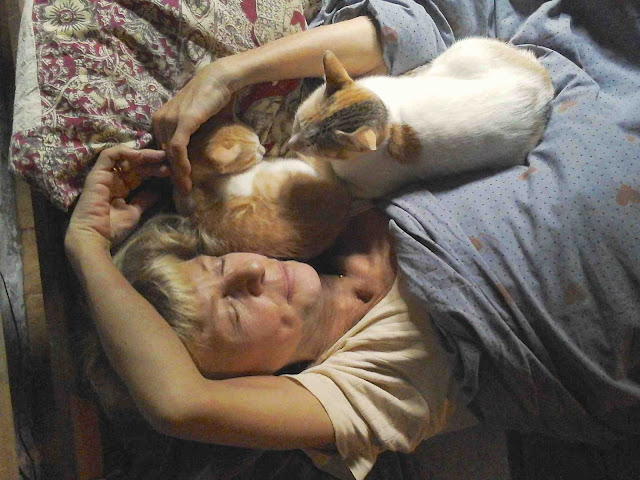 (also see blog post »Thirumal, the traditional Kerala massage for the Wellbeing«, from 13.7.2014)
Posted by Sylviander House at 06:55 1 comment: