On 21. of December 2012 Sylviander House was inaugurated with a touching ritual. Amaji, Alexander‘s Mother, and Annakutty, our grandniece, lightened the candles with us after my short speech about this very special date 21.12.2012 … 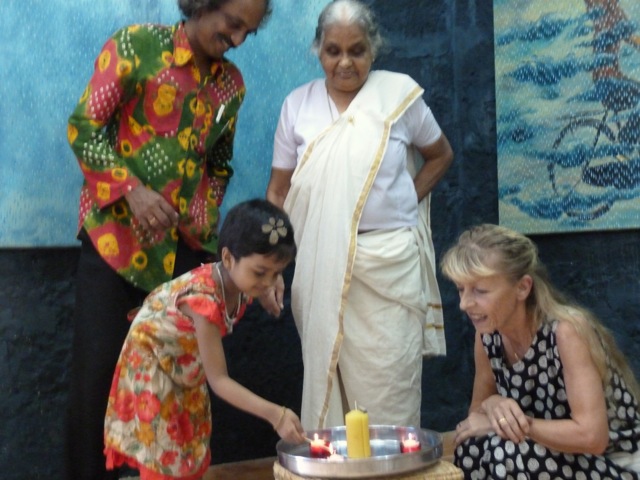 This date was calculated once by the Maya according to the several cosmic cycles, which meet in a conjunction that very date – like clock hand become one during a second every 12 hours.
The up and down of our sun system within the galaxy takes more than 60 million years, the full circle of the earth‘s precession-nutation needs 26000 years, the earth‘s circulation around the sun 1 year, exactly 360.25 days …
Through their high knowledge, the Maya recognised each day having an individual quality. That‘s why they could name each day differently. 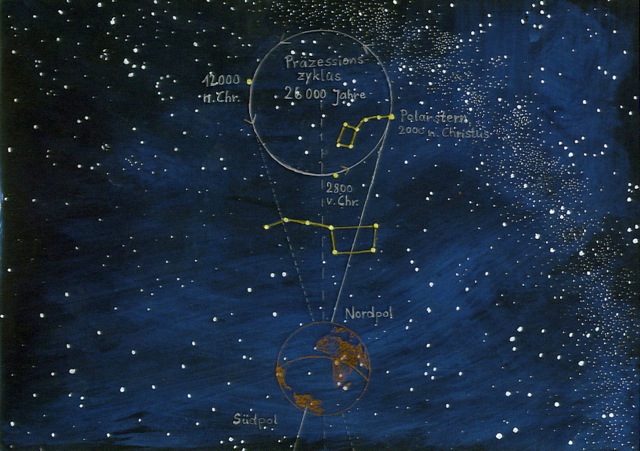 Hardly somebody here in Kerala knew about, while in Europe this issue was eagerly discussed for years before this date with the question: What would happen on 21.12. 2012? The majority, not knowing much about the background, misinterpreted the signs by seeing the world‘s end. The minority however had studied more details and got some knowledge about. Astronomically, this date marks the end of a huge cosmic cycle and at the same time the beginning of a new cycle. For the humankind this means the chance to a major step of evolution in human consciousness. 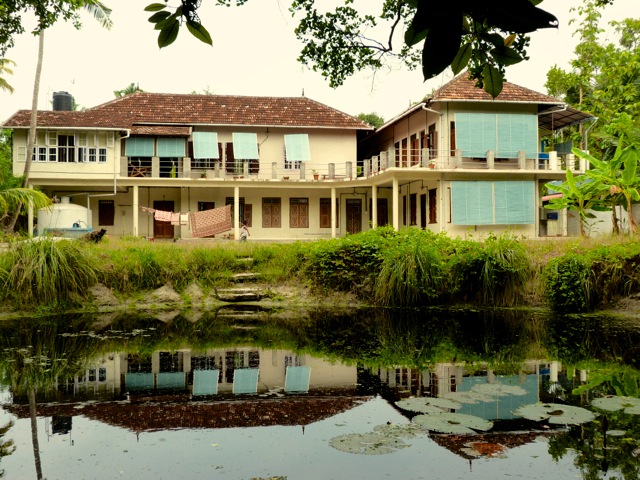 To synchronize with this cosmic dance and to being supported by the very special quality of this new age, we were happy – and lucky too – to have managed to finish the house, after 7 years building it, at the right time for this unique date 21.12.2012 to open our Sylviander House …
This was the topic of my welcome speech. 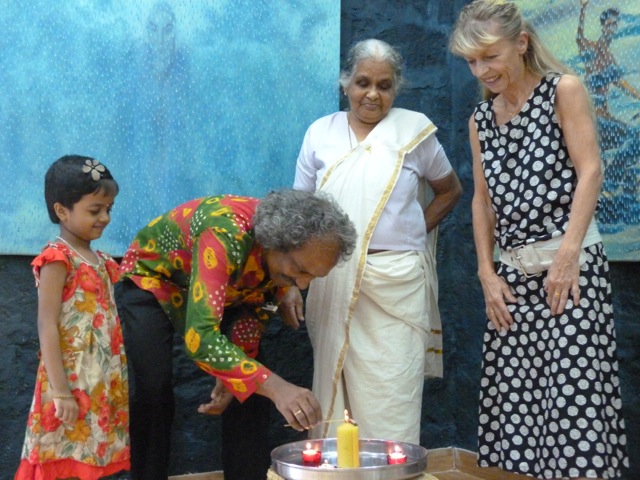 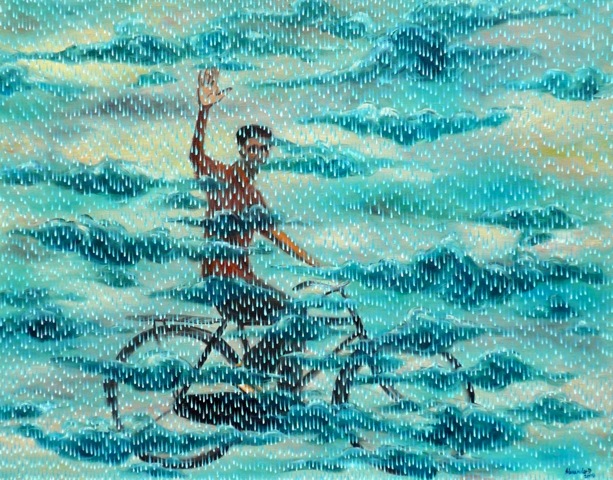 During these 4 years we welcomed interesting guests and friends from Europe, Australia, Asia, America enjoying our days with good conversations, music, dance and laughter … 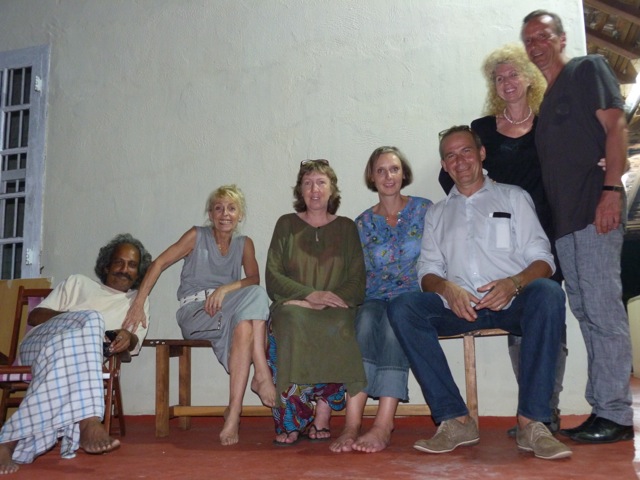 Also we organised or hosted projects of different kinds … 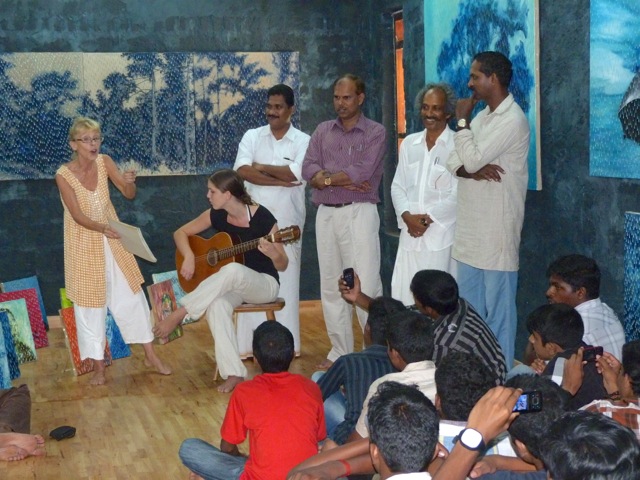 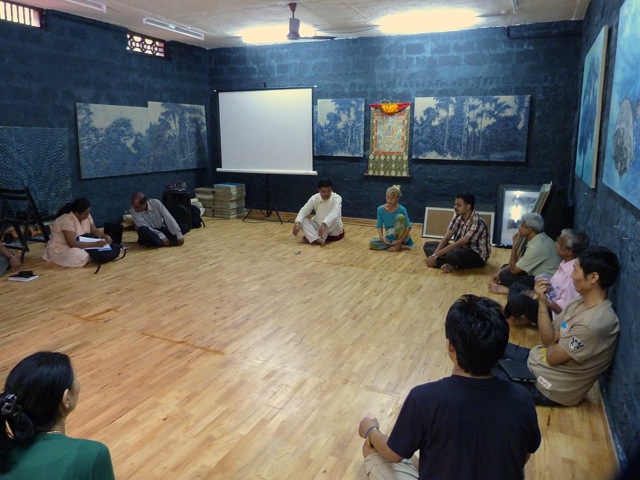 Since February 2015 the Wellbeing Tibetan Medical Camp takes place every 2 months in our Sylviander House for 3 days, which Sethu Das has initiated, friendsoftibet founder and wellbeing campaigner (www.friendsoftibet.org).
With him we founded CSPA (Center for Social & Political Art, www.cspa.in), which is located at Sylviander House. 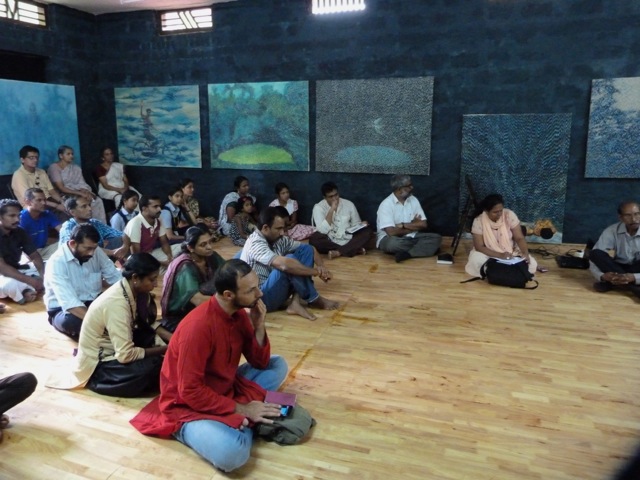 Many visitors have come from far away and from the neighborhood to see Alexander‘s paintings exhibited in the Art Museum. The most surprise to us was the exiting interest of the children. 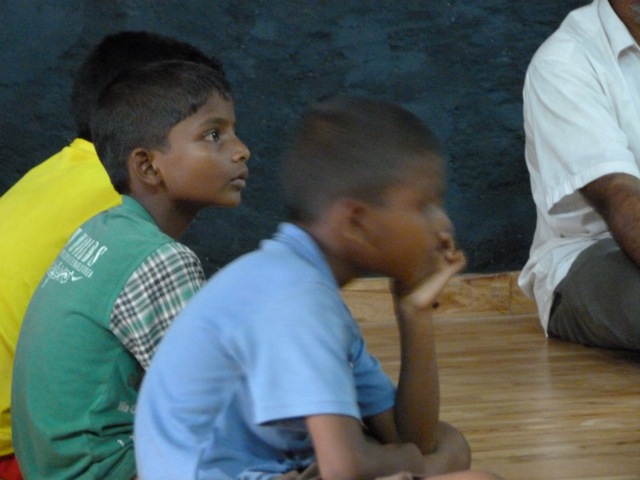 Sometimes after school they call at the gate, asking for the next children class or wanting to see the paintings or like to play on my old piano and drum and dance with me … 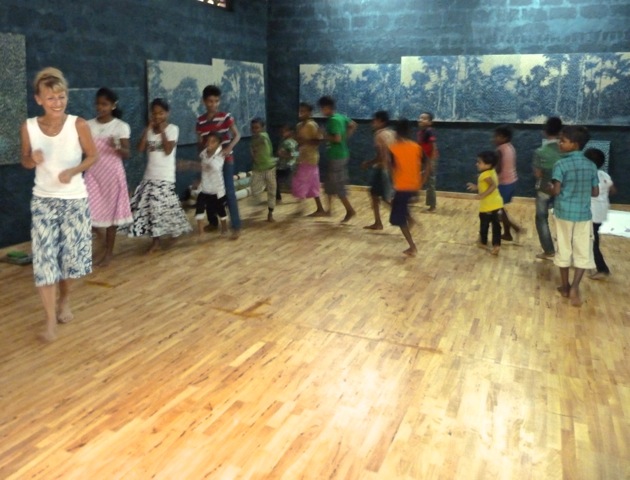 Some have come wishing to see the house and the garden. When they catch sight of the pond with the biotope and the 2 old Kerala trees ‘Kashampuli‘, they say: »Beautiful!« – that is wonderful to hear. 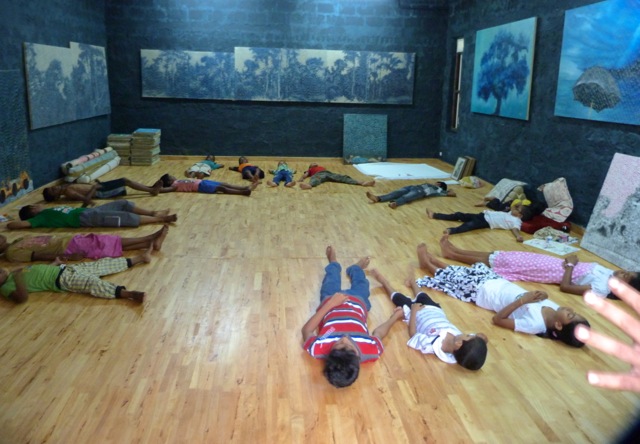 ‘Kashampuli‘ once were the typical trees of the Keralese landscape, growing beside the ponds. Nowadays this tree species is almost extinct. 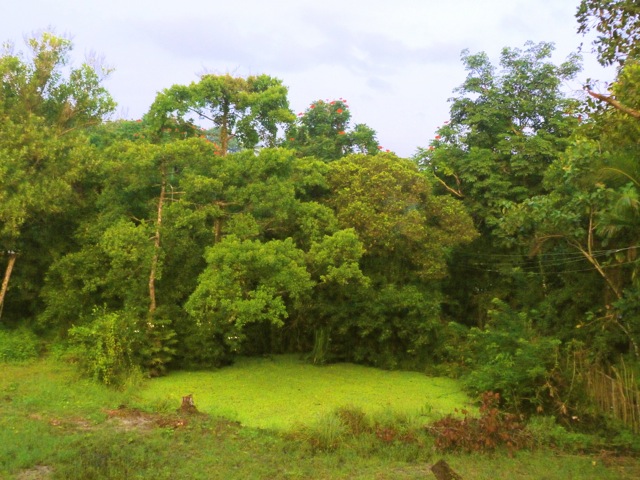 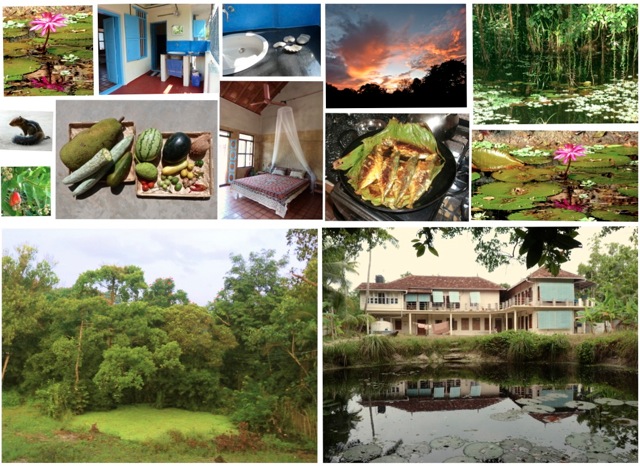 Building a House in Kerala – the Ground Floor

What happened until now:
4.Sept. 2004: Together with Alexander‘s Mother Amaji we went to Chettikad for having a look at the land. After years of searching, this time our heart says YES! We buy the land. Then we have to go back to Germany.
Aug.-Sept. 2005: Sylvie finds first inspirations for design and position of the house by standing on the land being in contact to the surrounding nature, while Alexander organises the workers to remove the undergrowth. Then we measure the position for the 20 sqm hut – the later massage room and during the Wellbeing Tibetan Medical Camps the consulting room for the second doctor. But for the first, all our collected windows and doors from old traditional houses had to be stored there.
Construction of the hut is done during our stay in Germany.
Febr. 2006: Transport of our collected windows and doors from Punnapra, where we stay at Alexander‘s family, to Chettikad to store them in the newly built hut. Having only a short time in India, we return soon to Germany.
Aug.-Sept. 2006: Sylvie has done the final design of the Sylviander House and worked out on millimetre paper. Later being checked by an old Vashtu-Master, who is surprised how somebody not having studied Vasthu is able to calculate a nearly perfect plan – a 2 cm (!) correction was made only!
Searching and buying more windows and doors at Jusuf‘s shop, a secondhand dealer, who is very helpful. Everything has to be transported by a pickup to Chettikad, where it is piled in the hut. The space is getting tight.
9.Aug. 2006: Measuring the land with Vasthu architect Sunil for the foundation.
28.Aug. 2006: 11.45 a.m. stone laying! Date and time were calculated by our astrologer Shastri. During a traditional cut of the 1.wooden piece by the old Vashtu Master, the splinter falls in a very good way to the ground, which is interpreted as an optimal omen!
According to his advice, we plant 2 small Jackfruit trees and 1 flower tree in front of the house, and behind 1 coconut palm.
Some family members and friends have come to join the event.
The granite foundation is constructed during our absence – we have to go back to Germany. Brother in law Varghese from Punnapra leads the works as architect and draws an official plan for the application at the government office … 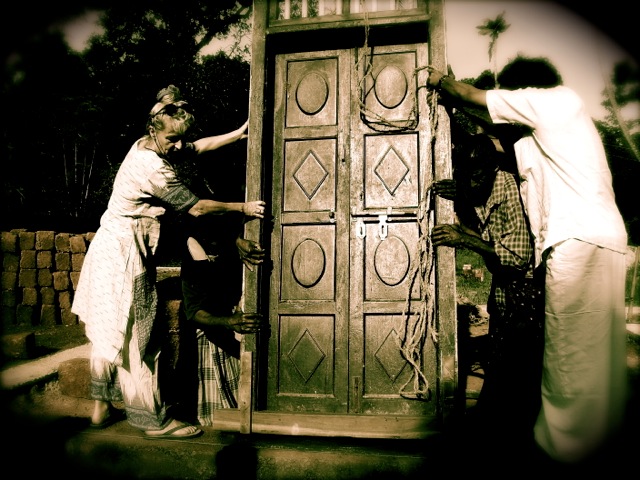 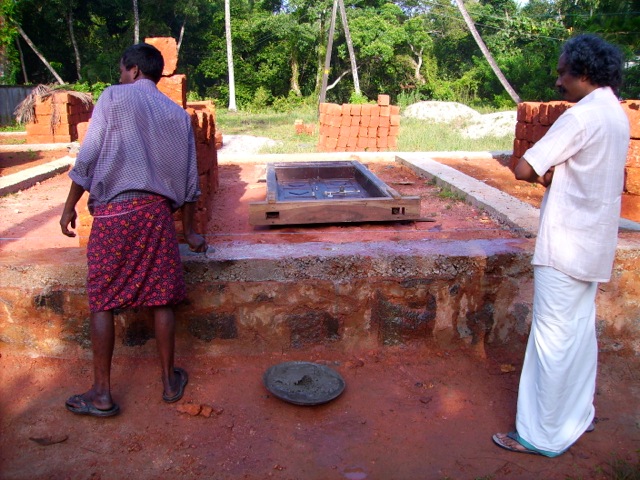 We arrive on our land in Chettikad already at 7 a.m. – some preparations have to be done before the function. In the early morning light, Stephan, the head of the masons, mixes cement, water and sand, which he applies on that part of the ground wall, where later the main door will be located. 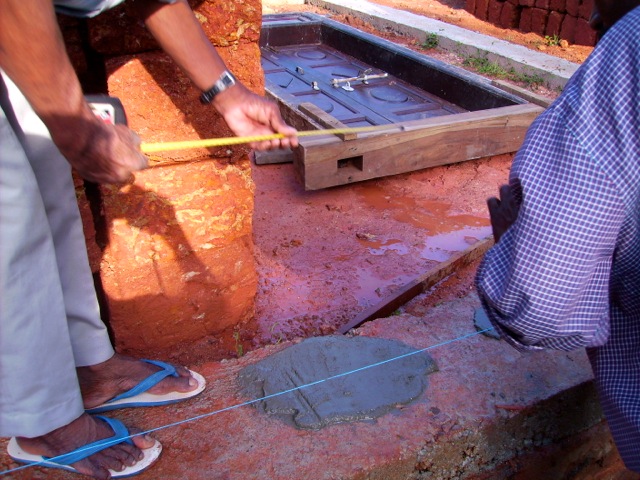 With the help of fixed threads, marks on the applied cement and a measuring tape he calculates the correct position. 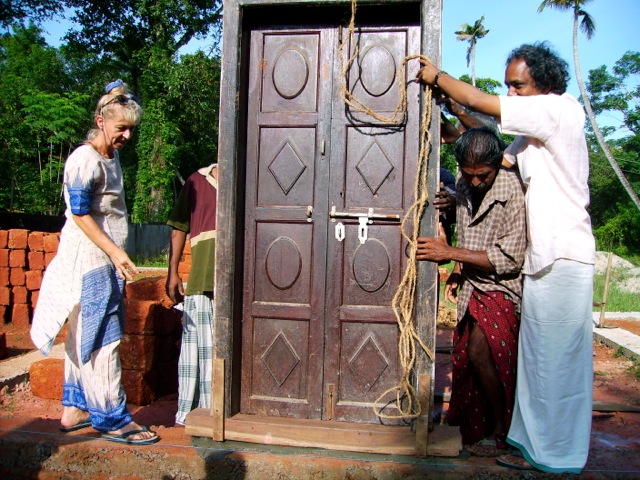 We did it! Our first door!
Ironically, this first door will be replaced in the following year by a bigger one and becomes then the door for my writing room. But this story will be told in another post … 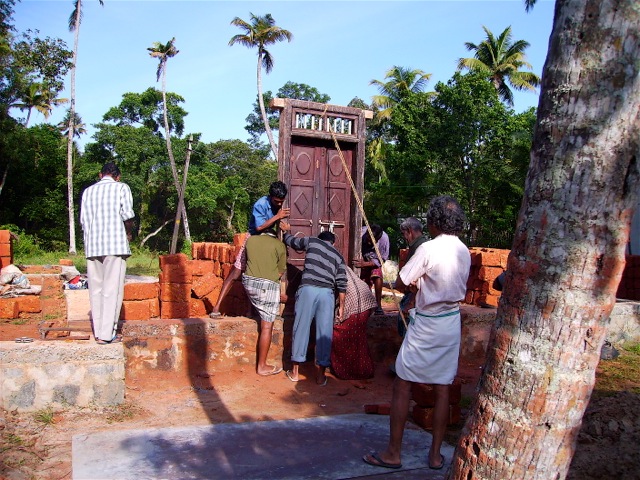 Many hands are needed to fix the door in straight position with robes on both sides of the door, tied with heavy stones on the ground.
The masons start their work, while we choose the other doors and discuss with Stephan where to locate them. All doors have to be fixed with robes … 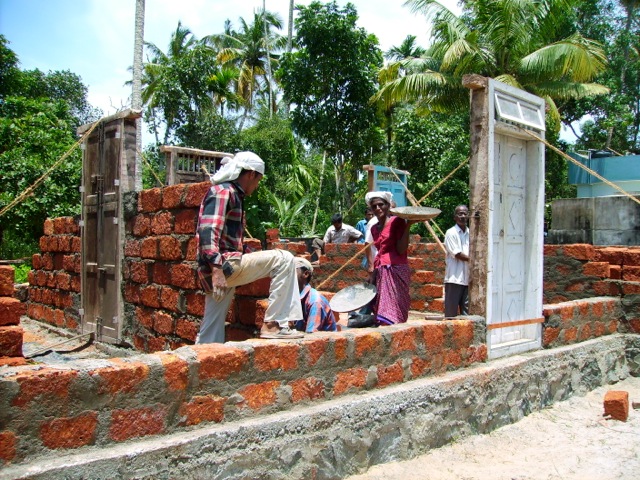 For the ground floor the natural red stone Latrex is used, each piece of big size and really heavy. The first floor will be built with bricks. 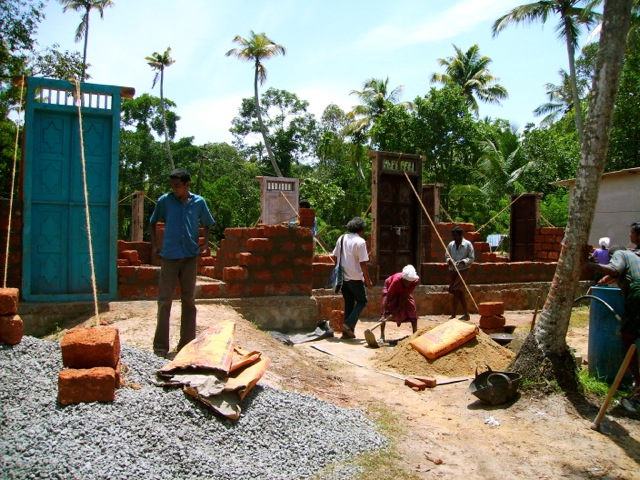 When the wall reaches a certain hight, the same procedure as before with the doors follows with the windows …
What hurts, is the fact, that the coconut palm in front of the main entrance has to be cut later. But still the palm is useful to tie the robes on it, stabilising a window. 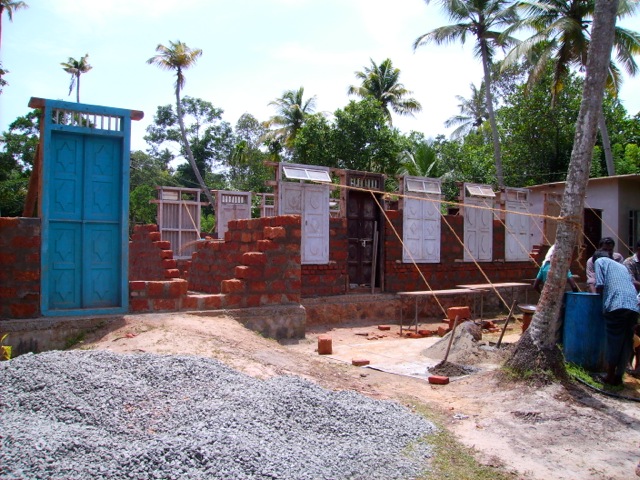 Once the big blue door belonged to a church. For our house it will be the door to the art museum …
It really looks strange and funny to see such an installation of doors and windows in the landscape. 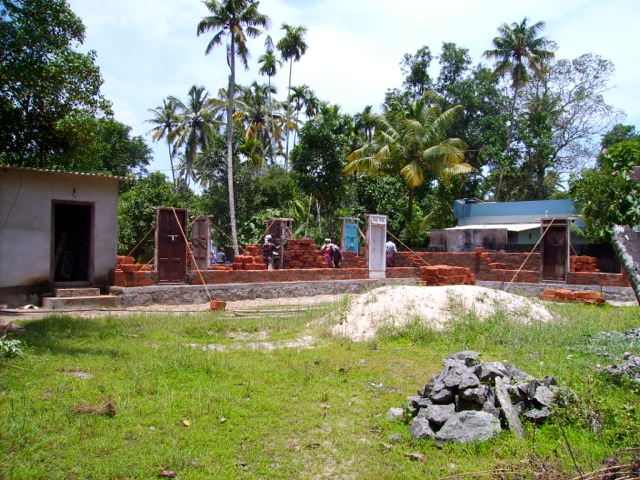 We are always on the spot to having an eye on everything. To build a house with secondhand windows and doors demands constant attention. No door is equal, the same with the windows, their looks and sizes are different. Sometimes being lucky, we could find window couples.
That‘s why the place of each window and each door has to be wisely considered. 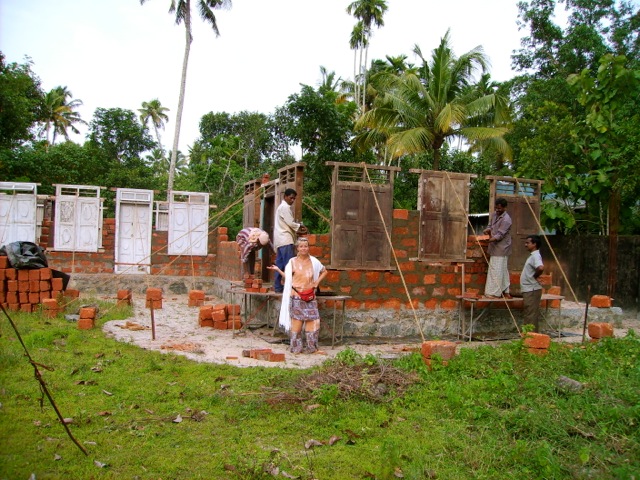 Do we have to go to town for buying tools and materials, then only after everything is cleared with the workers we can leave for some hours. 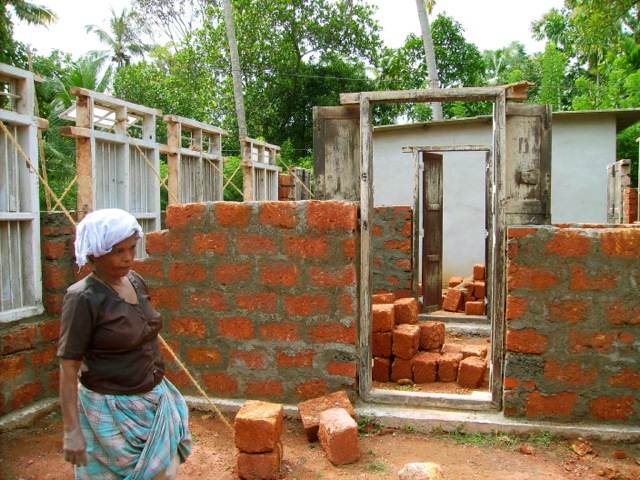 But since the workers never have buit a house like this and our ideas differ completely to theirs, confusions and mistakes happen … 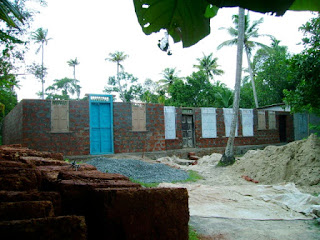 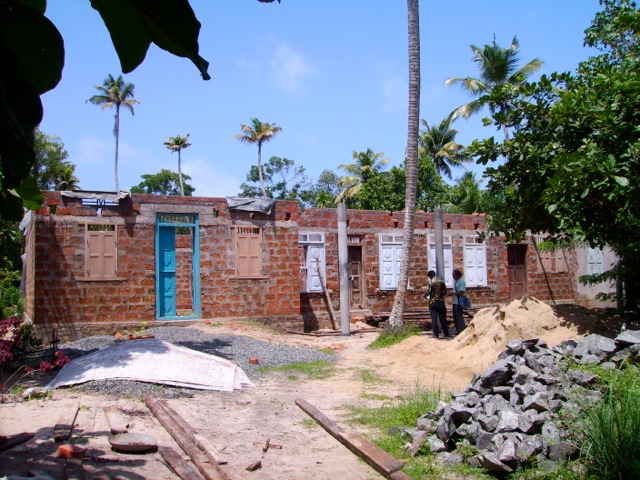 And the next mistakes follow …
On 12. Sept. 2007 Sylvie checks from some distance the symmetry of the 2 pillars in front of the entrance door: they are not symmetrical!
A big argue starts about this issue. Alexander suggests, just to change the perspective with some steps aside to find them in symmetry! Sylvie insists, the difference was around 10 cm and this has to be corrected. Because: This is the entrance!
After Stephan and some helpers fixed a complicated net between door and pillars, then measuring and counting and thinking, finally he results: 10 cm!
Sylvie beats the indian group. The pillars are placed correctly. 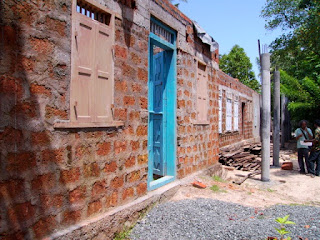 Works and corrections of the ground floor are done, when our time is over. We have to fly back to Germany – with the memory of the green dreamy path to our Sylviander House in mind … 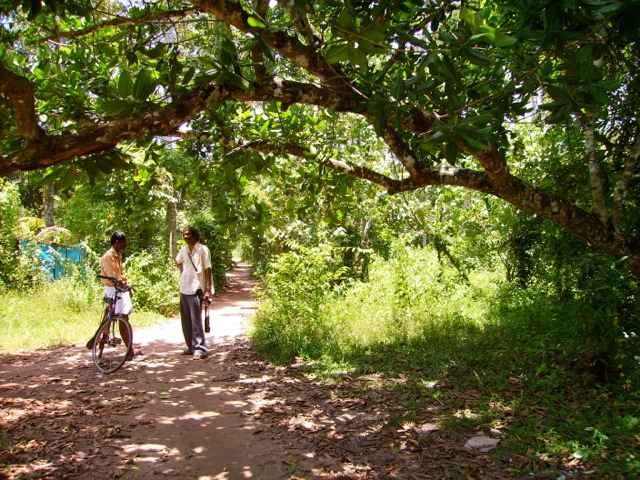 The construction of the concrete ceiling is done with our absence. It takes 2 days with the help of all family members.

See also the previous story – about the stone laying:

German speaking readers can read more about house construction and shifting from Germany to India in my story »Schabdam in God‘s own Country« in the anthology »Indien, wie wir es sehen« at the Drachenmond Verlag, Germany.