Actually it was a student class. DTPC – District Promotion Tourist Council – had organised a 2 days training camp for students and teachers. The last day of this training camp was a 2 hours cultural programm in the Sylviander House Art Museum. Around 60 students came with their teachers. 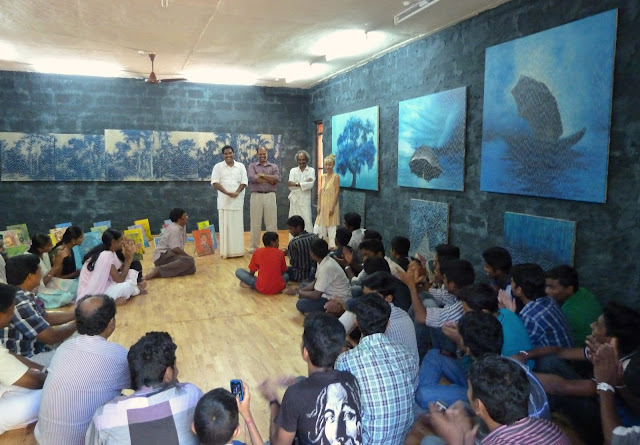 After the welcoming the visitors and a short introduction of Sri C.Pradeep (DTPC Secretary Alappuzha) and Sri Venu Gopal (Kerala State Tourism Club Chief Coordinator), Alexander talked about his vision since his student‘s time to open an Art Museum in a village one day in his future, about his need to paint and to draw, about his current exhibition »Water, the Mirror of the World«. 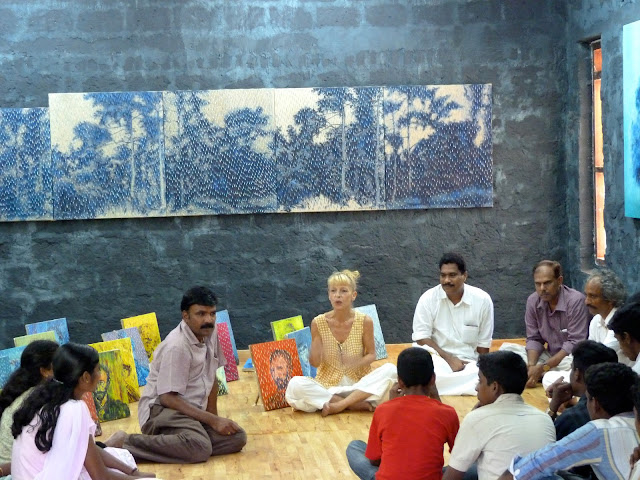 Before starting my talk I suggested sitting down with me on the wooden floor for being closer in a dialogue atmosphere with all the listeners. Asking about their impressions of the paintings it was good to hear how strongly the message of the paintings were corresponding with the people.

To get into the deeper meaning of Alexander‘s exhibited paintings, each filled with so many raindrops, it was necessary to have a look at the complexity of water as we did similiary in our 1st Children Class in January.

A discussion followed mixed in Malayalam and English full of questions and ideas about water‘s liveliness, the communication of the water in our body and in our surrounding, how it exchanges information wether negative or positive. The quality of water we drink and have around us depends on humans attitude, noise and pollution will give such a negative information, that it won‘t show crystals as it does in springs untouched by humans or respected. Even polluted water can create beautiful crystals after rituals and prayers.
This imagination gave a lot of input for change in thinking about our daily live. What does this mean for us, for our health physically and mentally, what does this mean for our society culturally?
Such questions hopefully will help to develope awareness in future.

To complete our gathering we all stood up for giving respect to the poet Vinaya Chandren who recently died. After a silent contemplation some of his poems Ajaya Kumar sang for us with his expressionful voise.

Finally our german guest Laura, who stays with us for 1 month, played guitar and all together we sang »Knockin‘On Heaven‘s Door« from Bob Dylan.
When we had finished, our brother in law Varghese was waiting already infront of the house with Chaia and hot tiffins from his Chettikad tea-shop for everybody. While enjoying it conversation in little groups went on and photographs were taken with smiling faces.
(written by Sylvie Bantle) 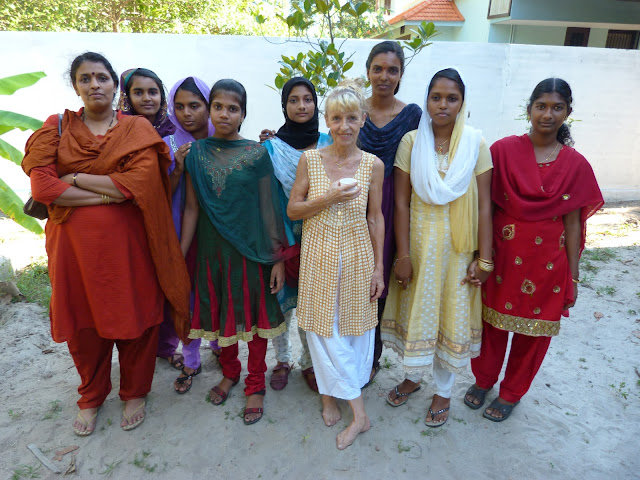 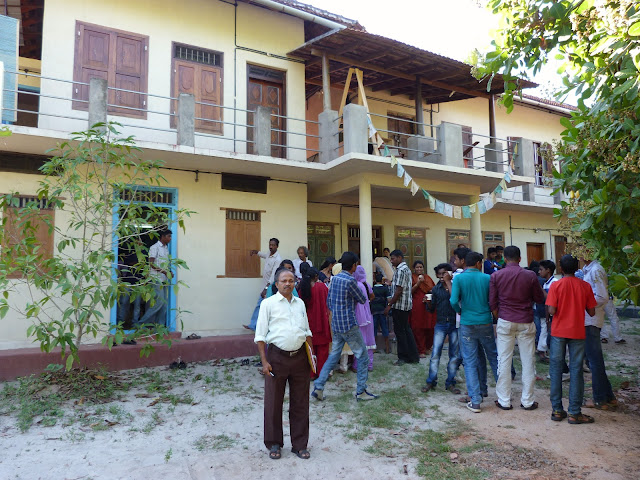 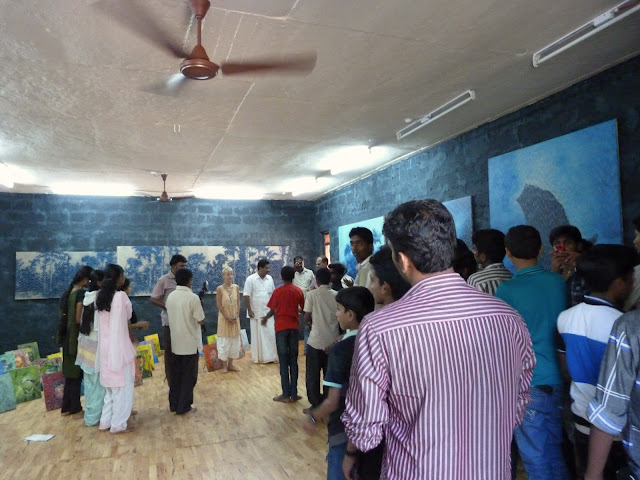 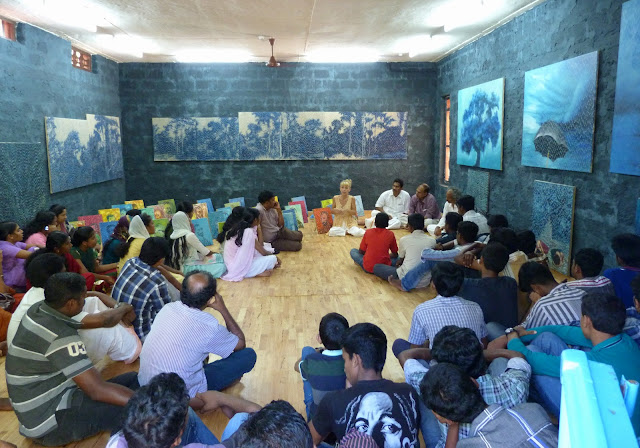 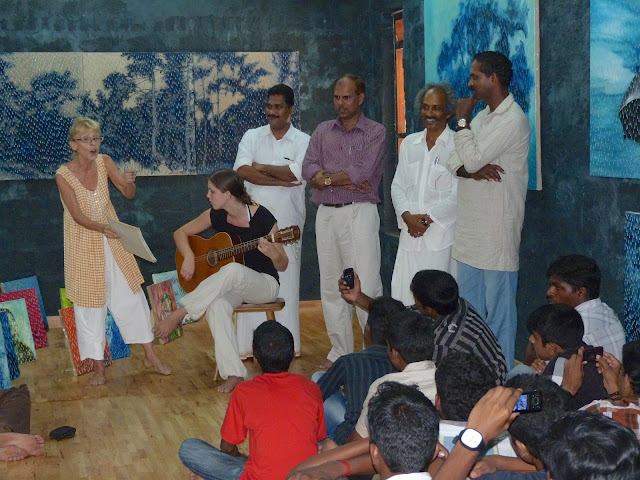 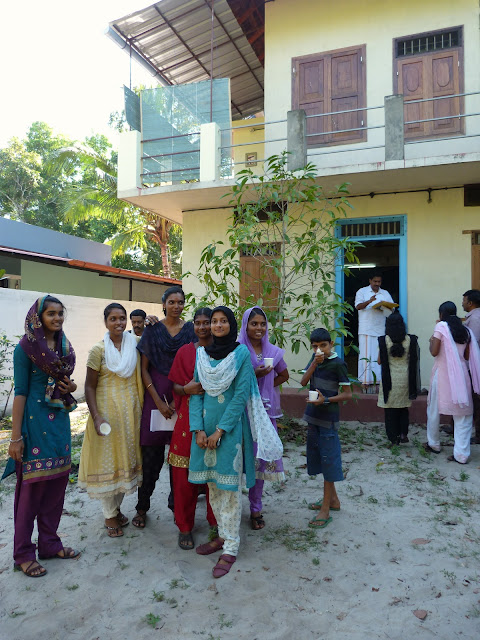 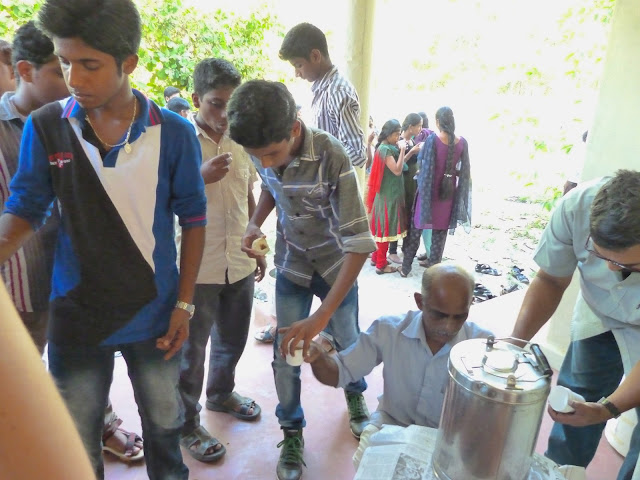 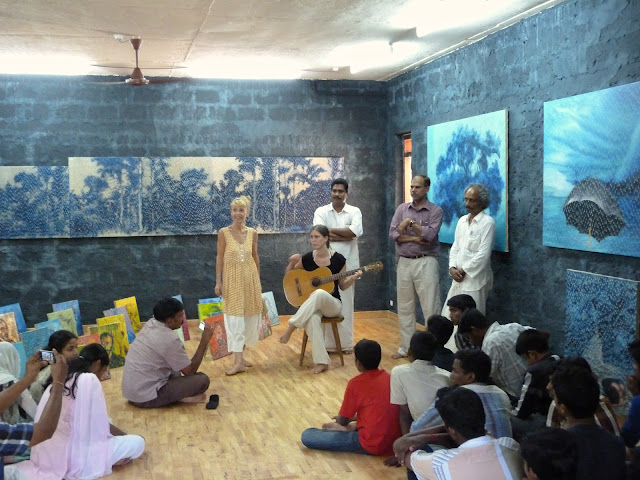 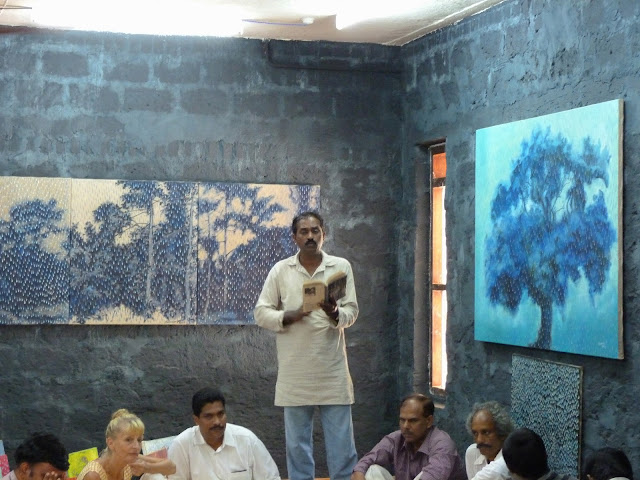 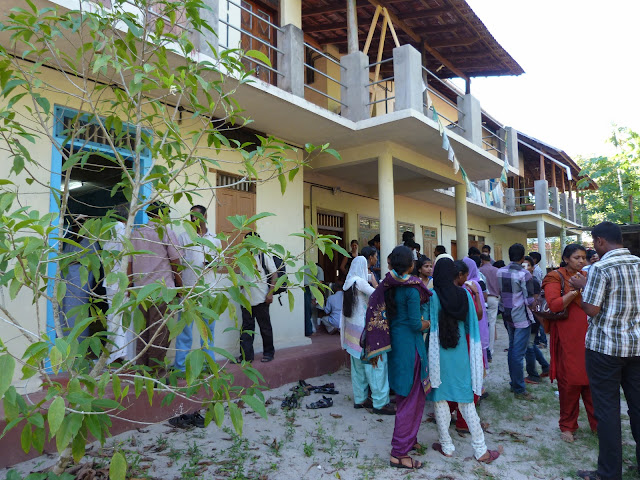 Posted by Sylviander House at 05:02 No comments:

Thanks to our guest Dorothea Geist, who stayed with us more than 3 weeks, we‘ve got some more beautiful photographs of birds.
Early morning already she was waiting on the morning tea veranda with her camera to watch the birds activities in the cashewnut tree infront of the Sylviander House.
Then later in the afternoon she was standing on the west veranda to focus with her camera the birds in the biotope around the pond of our garden.
Here are her photographs! Nanni, Dorothea! 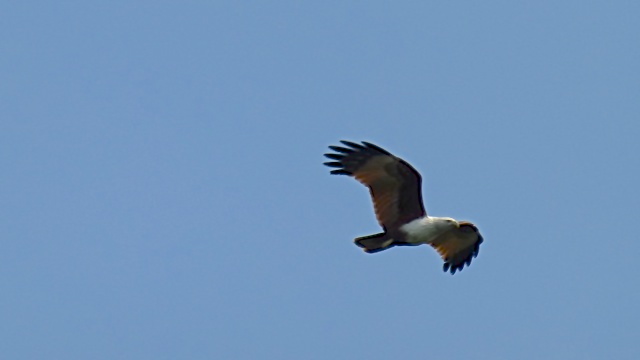 Krishna-Eagle before being spotted by crows! 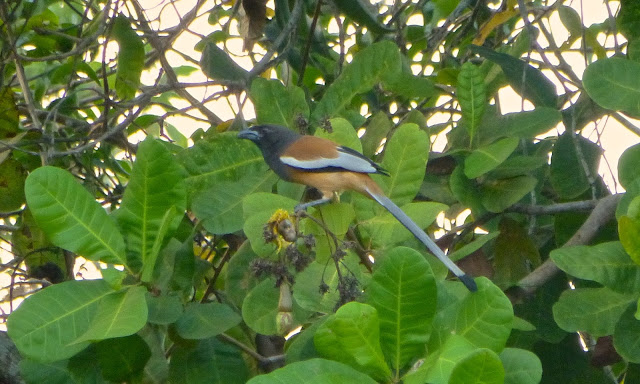 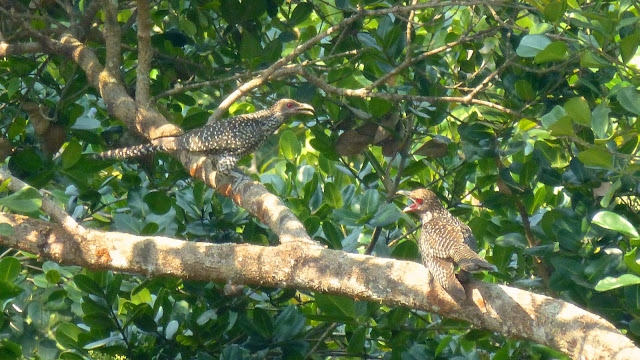 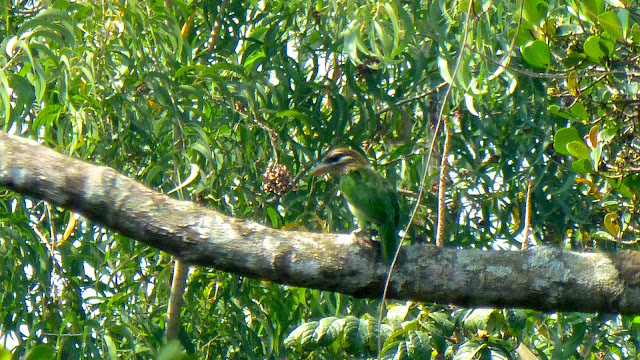 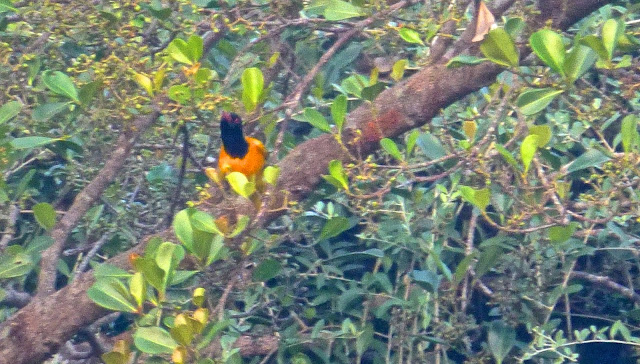 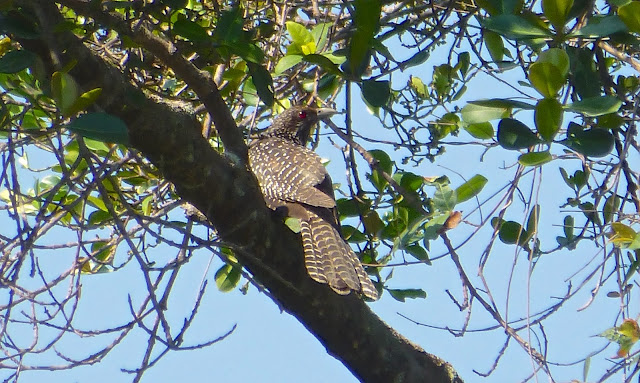 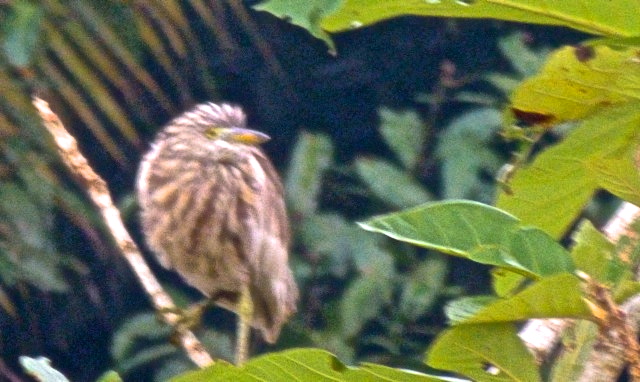 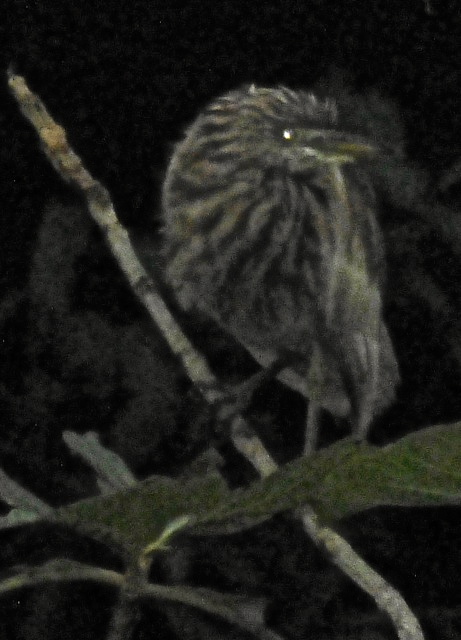 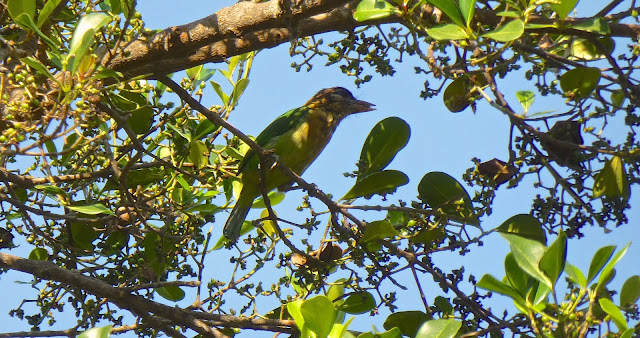 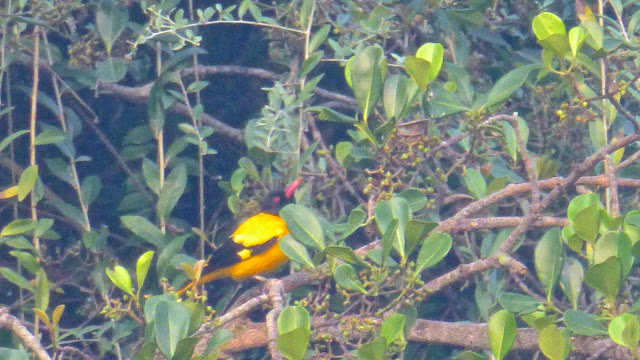 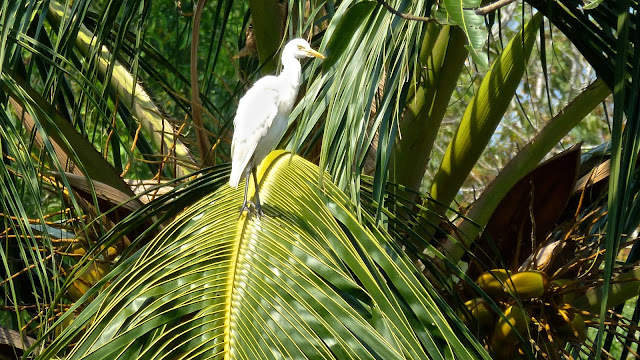 Posted by Sylviander House at 04:06 No comments:

Since we bought this land in 2004 at Chettikad, we keep some space for the nature. One of these spots is the biotope behind the pond in the garden on the west of the house. We don‘t touch this wilderness in order to provide a place for all the living creatures here. Many of them we don‘t see as four turtles and the frogs in the water, but a variety of birds we can watch in the trees and along the pond as kingfisher, woodpecker, kakadu, uppan, hummingbird and many more, of course a lot of crows, which up in the sky chase krishna-eagles or other big birds away.

Kingfishers come every day to catch small fish from Sylviander House pond. Once there were four of them in the same moment, once a couple made a nest at the shore. So we can spend hours sitting on the veranda without boredom. And of course there is a permanent concert made by these birds.

In the morning sitting with hot tea on the morning tea veranda to the East, birds and butterflies in the cashew-nut tree are very active. In the night the sound of night-birds flies with our dreams and next morning we wake up with the voices of the birds and of the nearby sea. 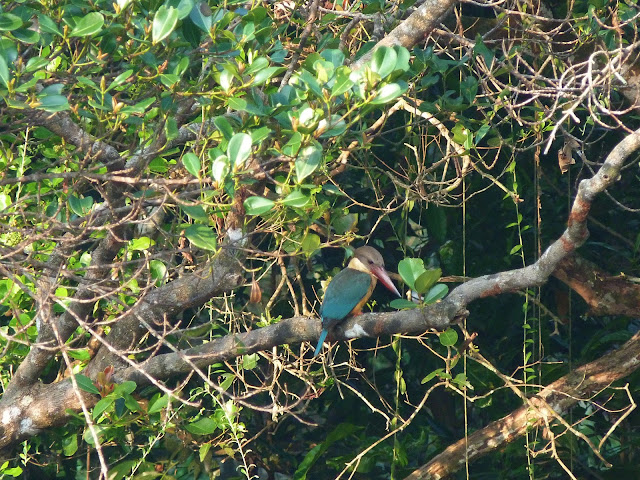 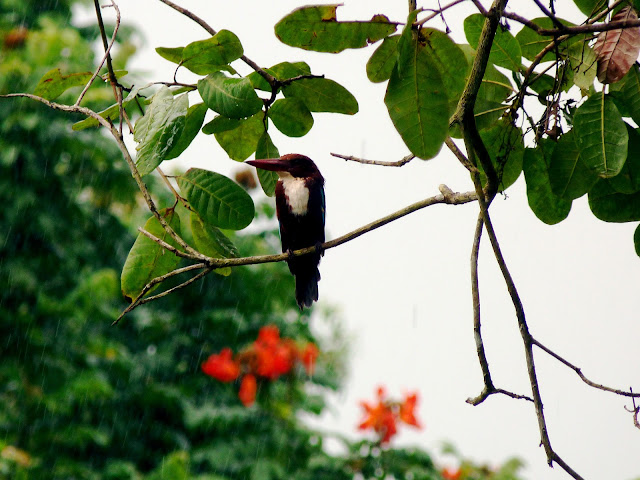 Kingfisher is sitting for hours on a dry branch waiting for the rain stops. 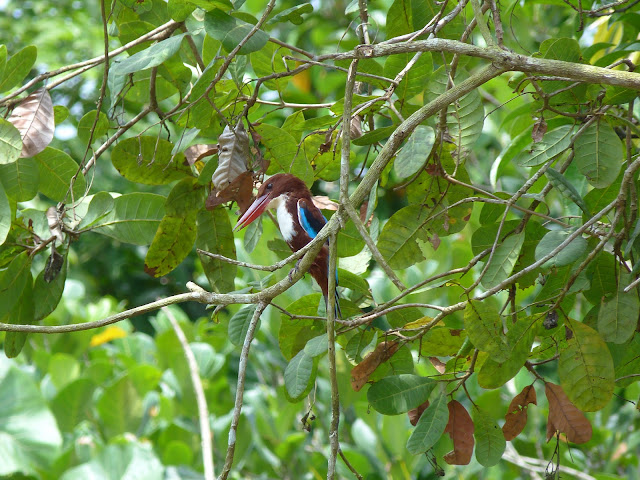 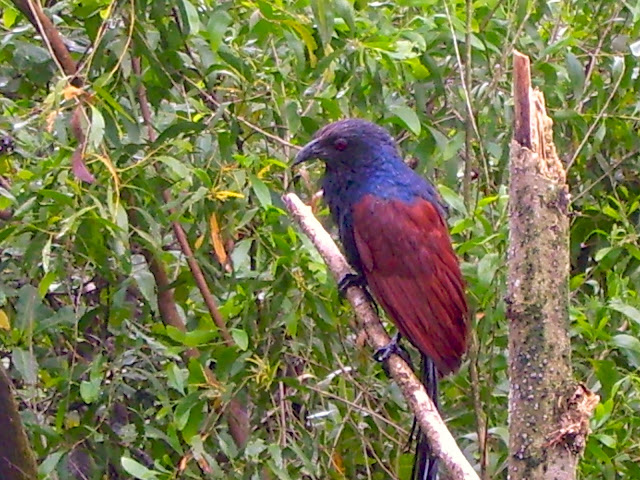 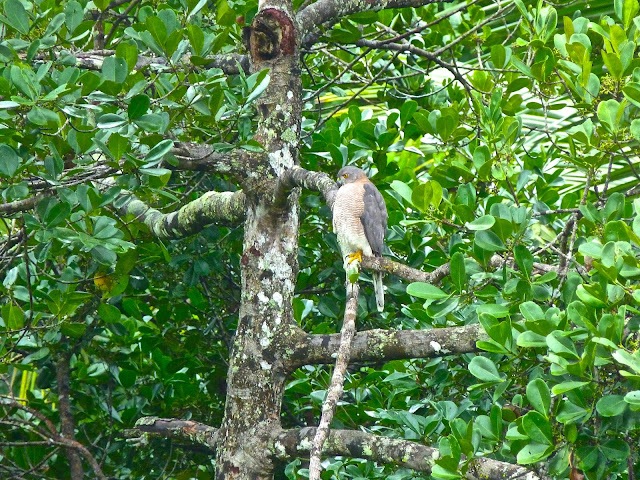 A very rare visitor! A friend of us who is an expert guessed: Shikra - Accipiter badius
Posted by Sylviander House at 04:00 No comments: