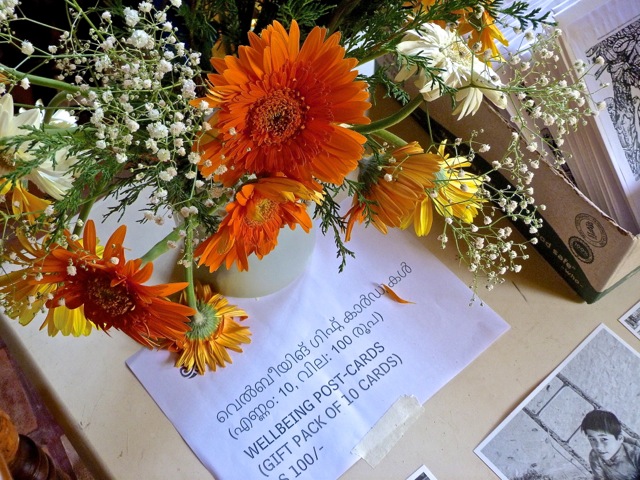 I love coincidences or better to say synchronicity! I imagine then, the flow of life creates a fruitful cooperation between incidents as meant for eachother. For oneself is nothing else to do than flowing with the life with open eyes …
Two days before the opening of the 55th Wellbeing Tibetan Medical Camp on March 9, our friend Kathleen from Canada visited us gifting me a beautiful bouquet of flowers with gerbera, one of my favorite and the first bouquet of flowers I got in India.
I placed it on the table in the entrance hall, where I would see it very often, since preparing for the Wellbeing Camp means I have to run up and down the whole day, always passing the entrance hall – now with this colorful spot on the table. 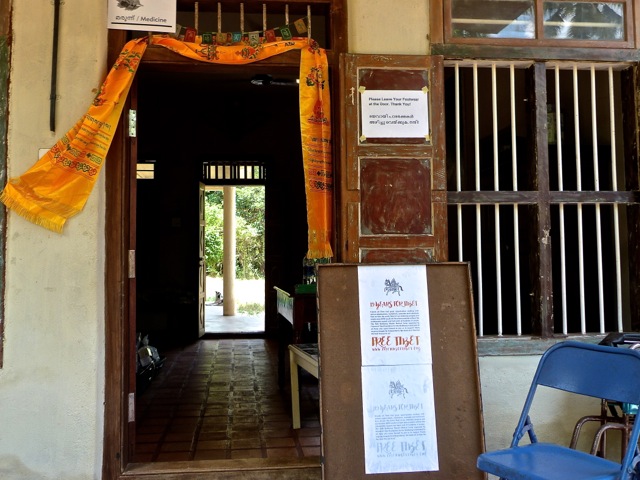 When Sethu Das arrived next day – as usual with organic vegetable and rice – and then seeing this bouquet of flowers it was clear, this would be a perfect decoration for the Wellbeing Camp, which was a special one this time of two reasons.
On the first day, March 9, we celebrated the completion of 19 years of »Friends of Tibet« as a Tibet Support Group. To commemorate, Friends of Tibet has produced a set of Post-Cards on Tibet with photographs from the Tibetan community in exile by renowned photographer Sarthak Banerjee. The gift set of 10 photographs is sold for a price of Rs 100/-. 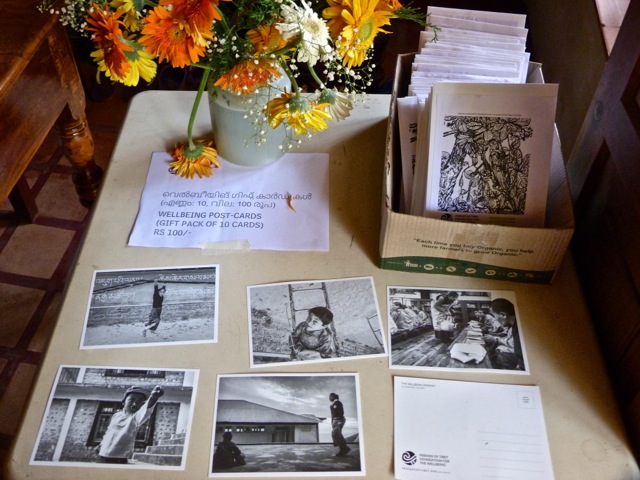 While patients are waiting for their consultation, Simba – called Little Buddha by the tibetan team – loves to watch the scene, sometimes joining the consultations under Dr. Dorjee‘s bed. 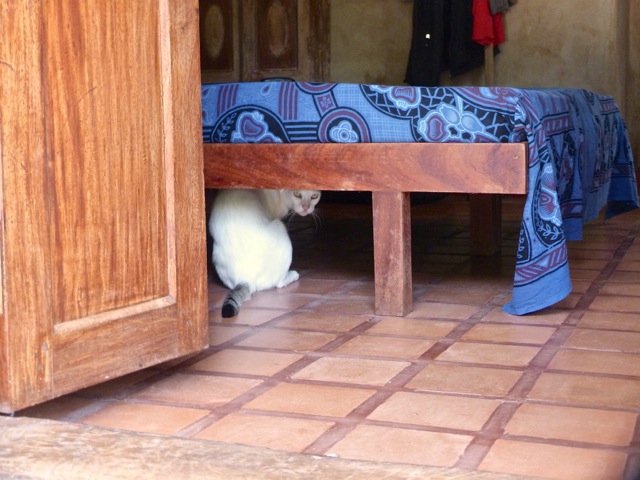 For the first time student Dr. Tenzin Methok had come, listening to the pulse of the patients together with Dr. Dorjee. 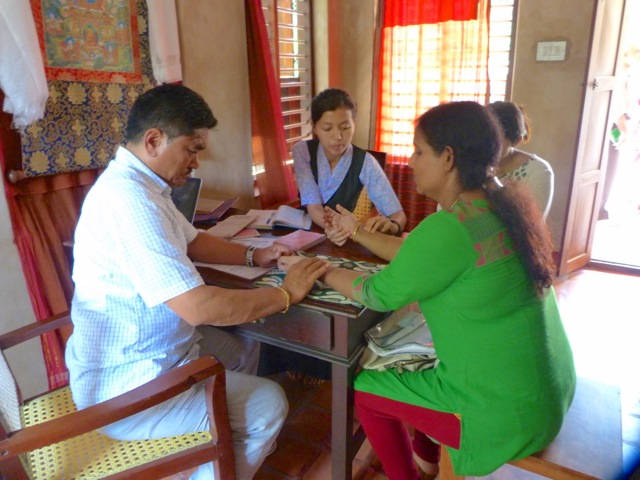 In the entrance hall Sonam Wangmo was writing the bills for the medicine, while Yazin Azad helped the patients to fill the form and having an eye on the scedule. 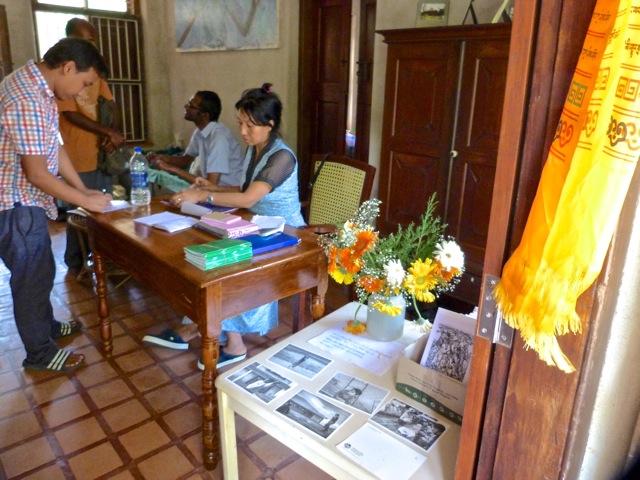 Tenzin Gesar was really busy with counting and packing the medicine, since he was alone this time for that task. 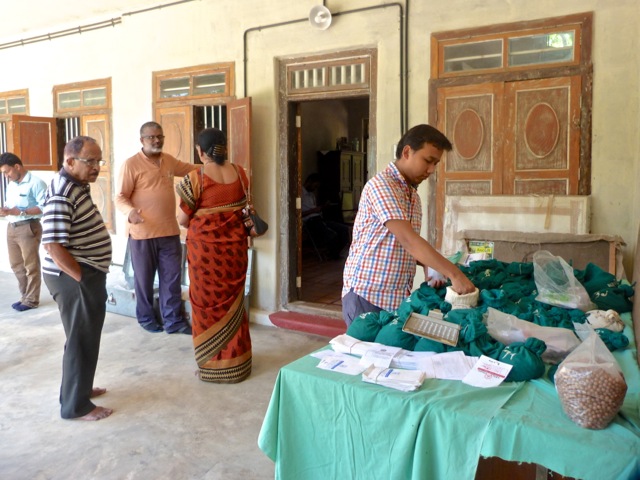 On the 2nd day of the Wellbeing Camp, March 10, we commemorated the 58th anniversary Tibet Uprising Day. It was on this day in 1959 that the first armed rebellion was fought between the people of Tibet and China.
– see the report by Yazin T Azad »The Struggle For Freedom and Dignity Completes 58 Years!«:
http://www.friendsoftibet.org/wellbeing/reports/wellbeing_march_2017.html 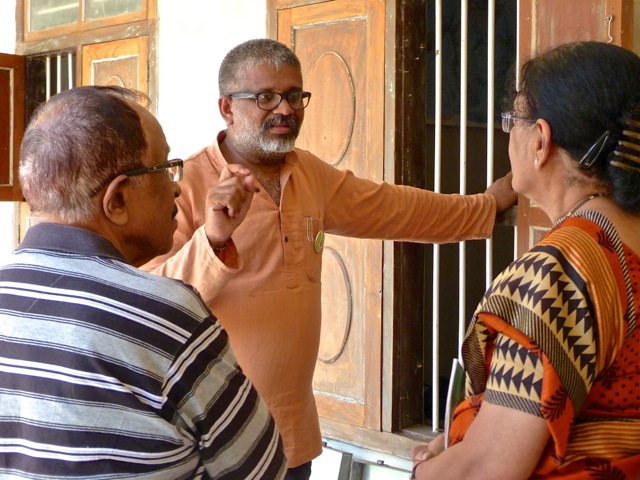 Everybody gathered in the museum, where Sethu Das gave an introduction for the Tibetan National Uprising Day … 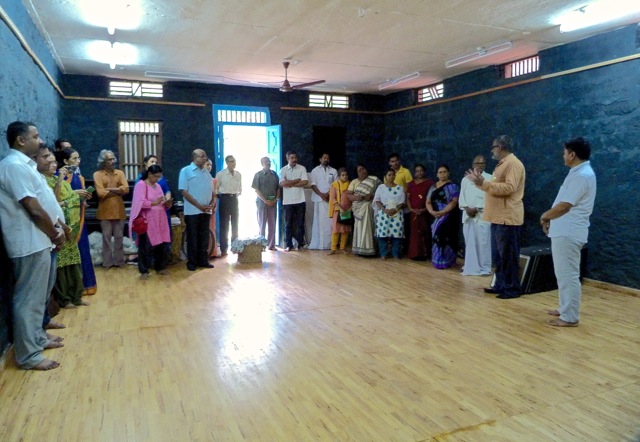 … he also points to the radio, which was used by the Dalai Lama during that time and on the way to his exile. 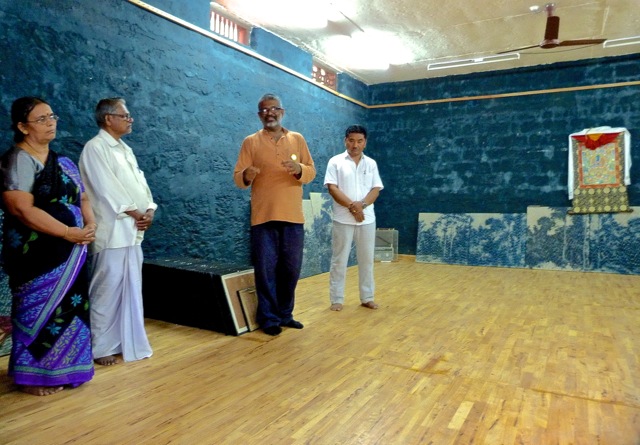 This radio is a permanent exhibition piece in the Sylviander Art Museum – sometimes carefully guarded by our cat girl Moojoo. 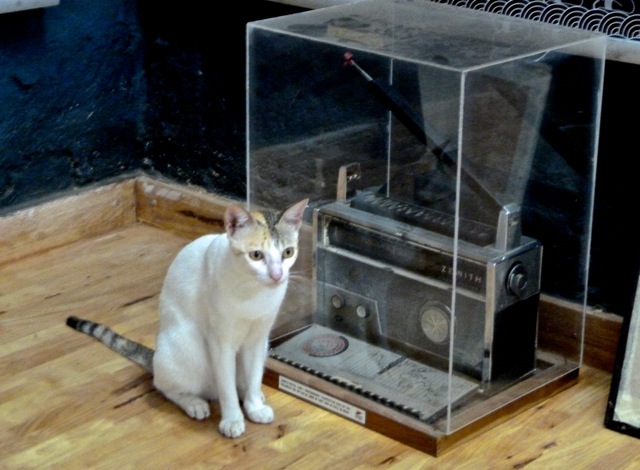 After Dr. Dorjee had spoken some words, we contemplated in a 2-minute silence in memory of all those who sacrificed their life for Tibet's freedom and independence. Then the tibetan team performed a prayer. 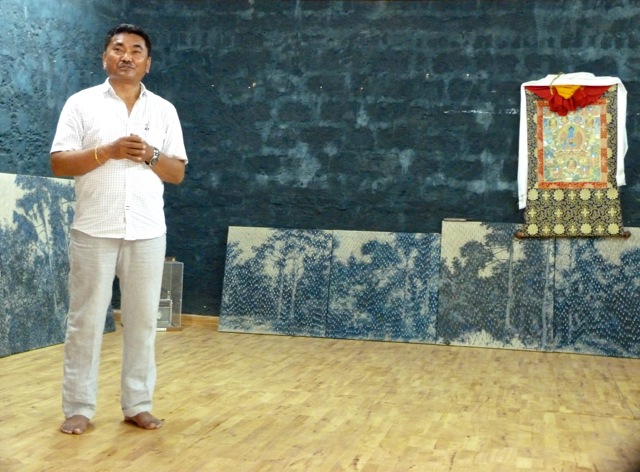 The Wellbeing Camp went on until March 11. As always during these days, a peaceful atmosphere filled the Sylviander House and the garden, a silent wellbeing sensually awared by everybody. 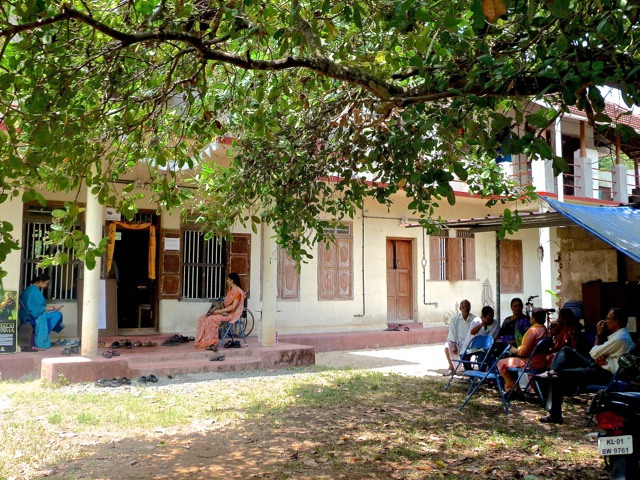 Nobody seems to be in a hurry, the patients just patiently waiting, reading or having some conversations. 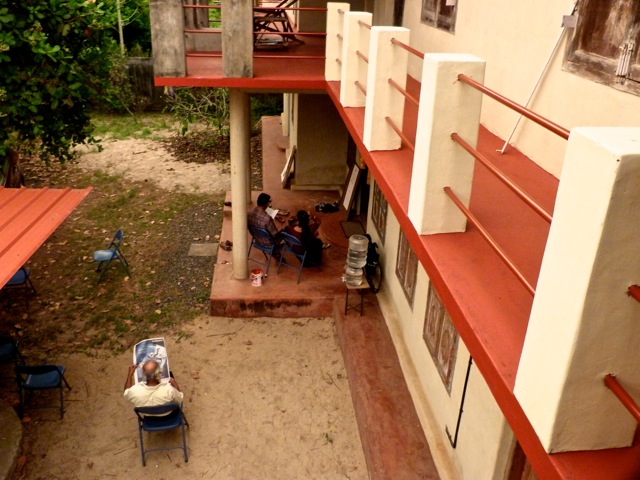 When the last patients left, it was dark already, but before one could witness the »Pokuveyil«, the dissapearing light with its magic glowing, which lasts a few minutes only … 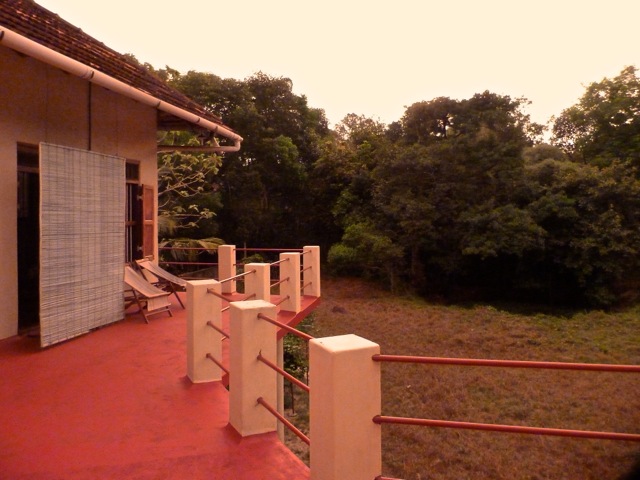 On the 3rd day, Eldtho Matthew came for a visit. As a longtime campaigner for Friends of Tibet he is an important part of the Wellbeing project, his preparation work for each Camp is indispensable. 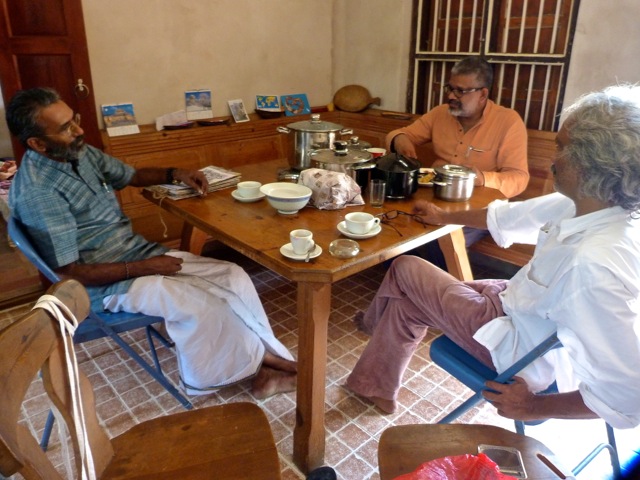 Clearly someone is missing in this circle: Eswar Anandan! The distance to his new living place outside of Kerala made it difficult to participate, but we all hope once in a while he is able to join the camp … 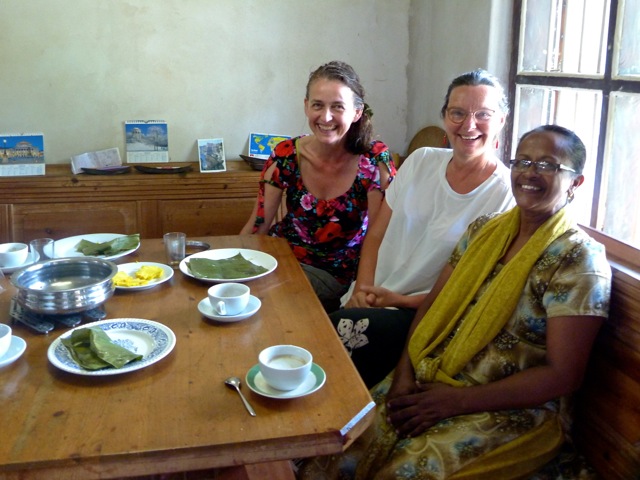 Accidentally two guests from Germany were staying with us during the Wellbeing Camp. Glad about this unsual experience, they took the chance to consult the doctors and to listen to the morning prayer …
The flowers of the bouquet remained vividly throughout the whole Wellbeing Camp, representing their joyful beauty to every eye … 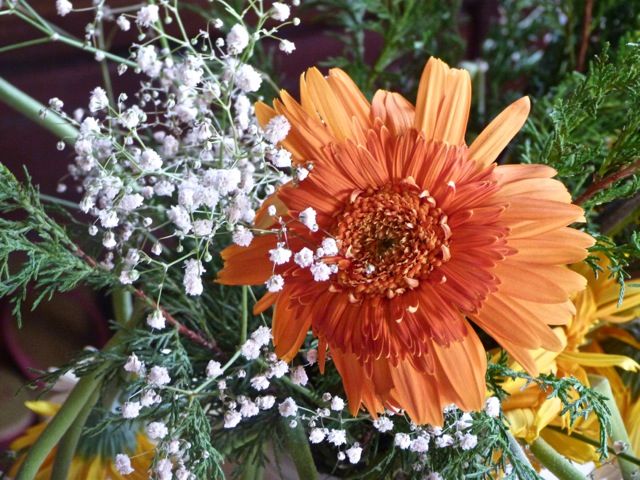 While the Sylviander House was filled with activities, outside in the garden something special was going to happen. Hidden in a big pinapple plant a new pineapple baby was born, very tiny and not yet visible from outside.
I discovered it, when I was watering the garden. According to my habit, always having a look into the biggest pineapple plants, desperately waiting for a fruit.
This one, 3 days old only, will be my 4th own grown pineapple fruit … 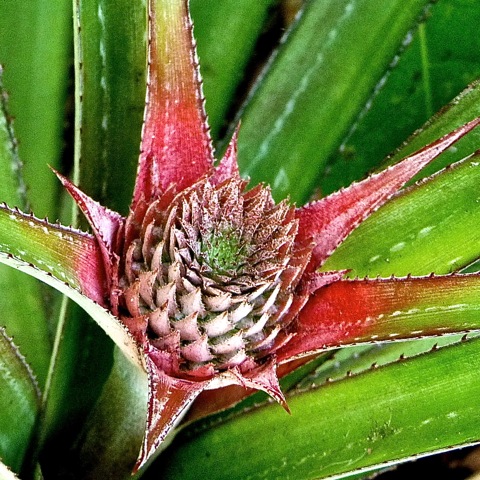 The 55th Wellbeing Tibetan Medical Camp organised jointly by ‘Friends of Tibet Foundation for the Wellbeing’ and ‘Men-Tsee-Khang’, the Tibetan Medical and Astrological Institute of His Holiness the Dalai Lama will be held from March 9 - 11, 2017 (Thu-Sat). The venue for the medical camp is Centre for Social & Political Art (CSPA), Sylviander Land, Chettikad Beach Road, Alappuzha, Kerala, India.

Posted by Sylviander House at 09:09 No comments: