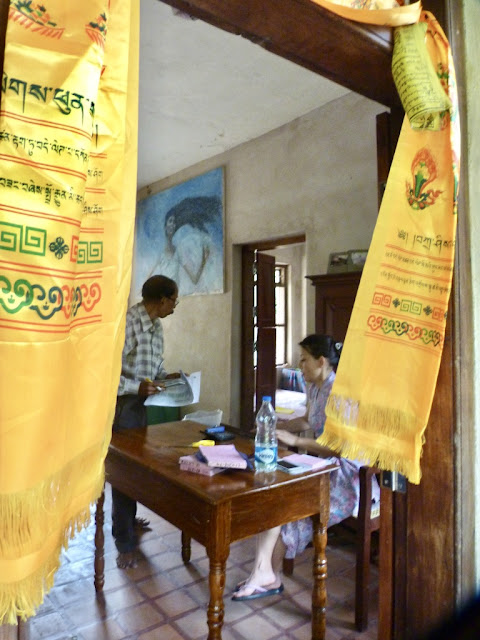 The 62nd Wellbeing Tibetan Medical Camp was the 20st at our Sylviander House, where our 1st Wellbeing Camp happened in February 2015. 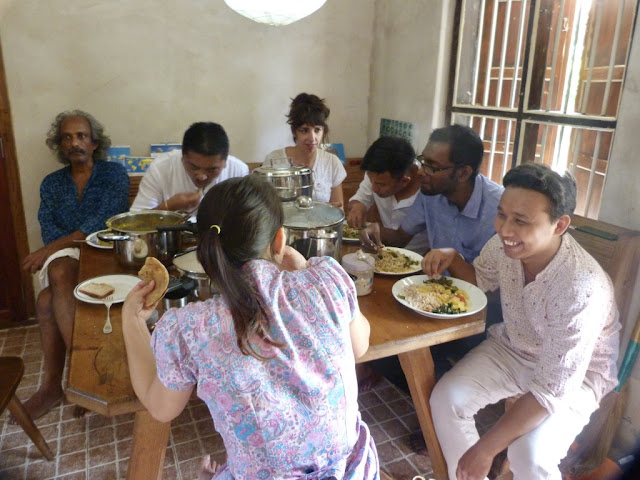 This time we had a special guest, Artist Francisca Carvalho from Lisbon, Portugal, who also was one of the Volunteers for the 62nd edition of Alappuzha Wellbeing Tibetan Medical Camp. 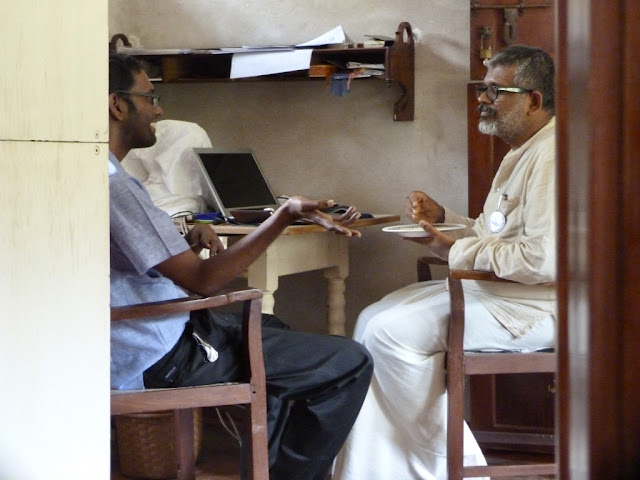 In my stitching room, which turns into an office during the camp, Sethu Das discusses with Yazin T Azad about the theme of this time Wellbeing report, which will be about Artist Francisca Carvalho … 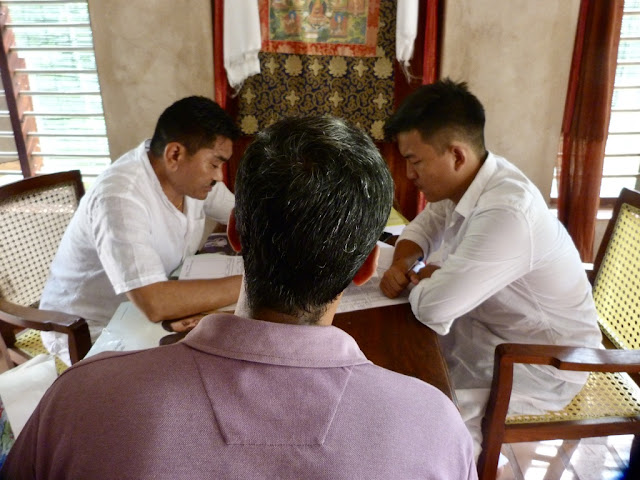 … while the consultation goes on at Dr. Dorjee’s room, on his side as always an assistant doctor, who has a good chance to amplify his studies. 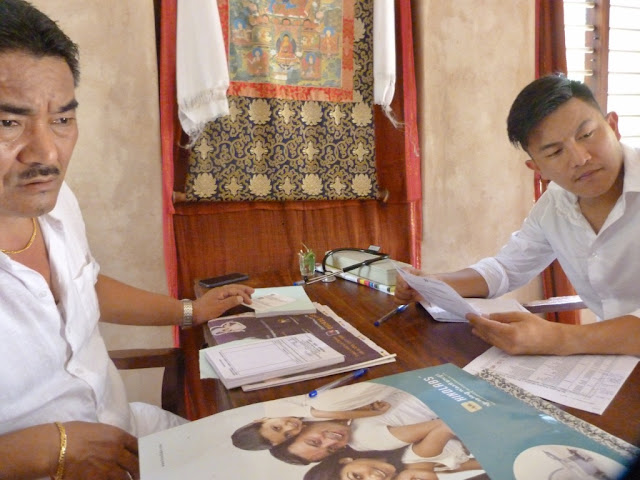 After lunch Yazin T Azad has a conversation with the Portuguese artist Francisca Carvalho on the morning tea verandah at the 1st floor. 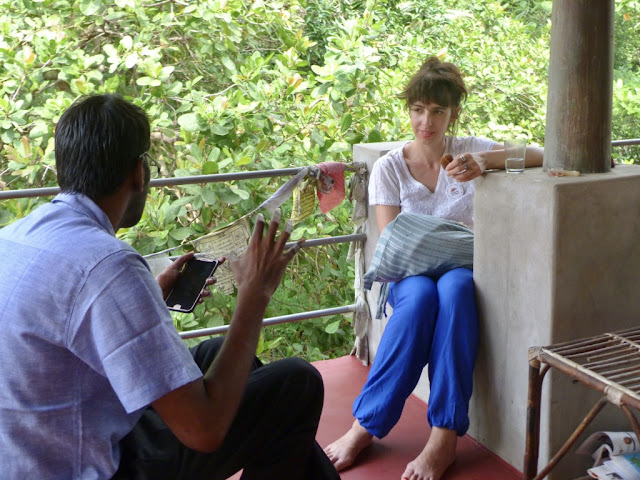 Francisca Carvalho was in Kerala recently to hold 'Nila', an exhibition of her water colour drawings hosted by Design & People in association with Kerala Museum, Edappally from May 7 – 8, 2018. 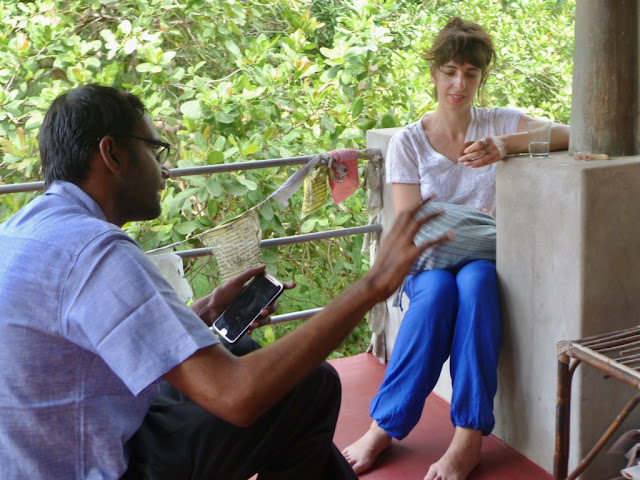 While tea time or during lunch I had very interesting talks with Francisca, who enjoyes to work with her hands too like me, especially as I did during my past time as a fashion artist and a fabric designer. 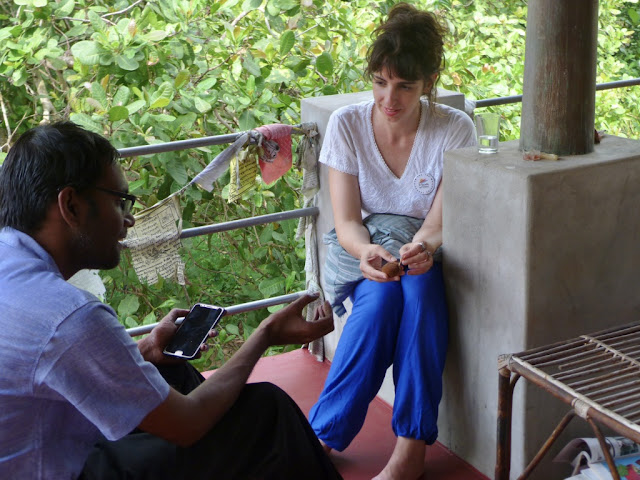 Please read the fascinating conversation which Francisca had with Yazin:
62nd Wellbeing Camp Report by Yazin T Azad | (May 2018)
http://www.friendsoftibet.org/wellbeing/reports/wellbeing_may_2018.html(Foto_1) 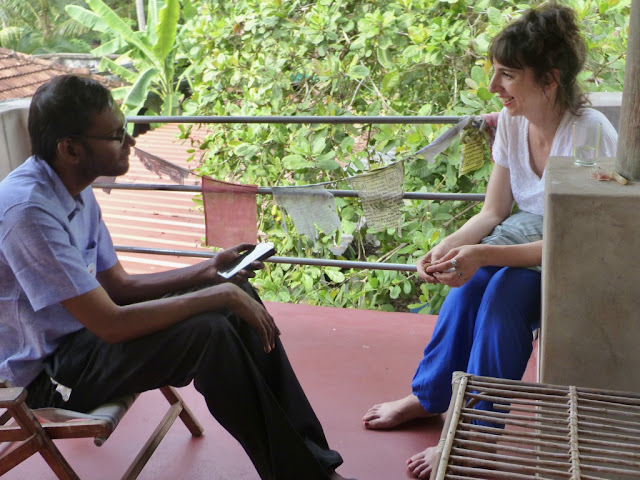 Since I had to leave to airport in the night for my flight to Germany I could witness and take pictures on the 1st day of the Wellbeing Camp only. 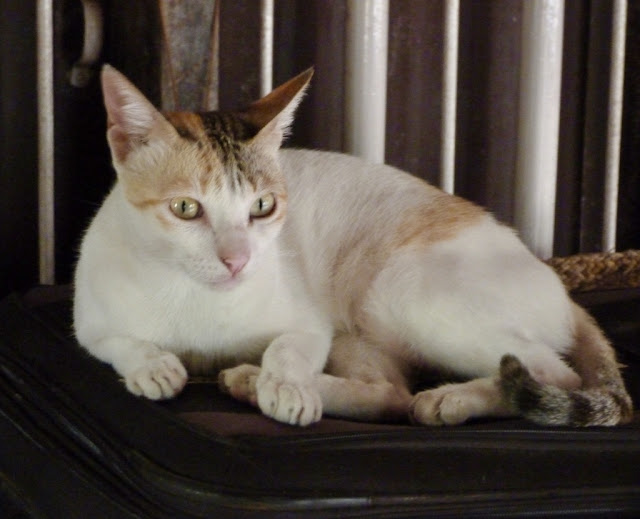 Even for a month only being away it is hard to say good-bye as always. My cat girl Moojoo as she sensed my soon departure did’nt want to move from my suitcase …

The 63rd Wellbeing Tibetan Medical Camp organised jointly by ‘Friends of Tibet Foundation for the Wellbeing’ and ‘Men-Tsee-Khang’, the Tibetan Medical and Astrological Institute of His Holiness the Dalai Lama will be held from July 11-13, 2018 (Wed-Fri). The venue for the medical camp is Centre for Social & Political Art (CSPA), Sylviander Land, Chettikad Beach Road, Alappuzha, Kerala, India.
- Registration by SMS/WhatsApp: 9400354354, 9061354354
- Registration by Email: wellbeing@friendsoftibet.org
- Registration Online: www.friendsoftibet.org/wellbeing/