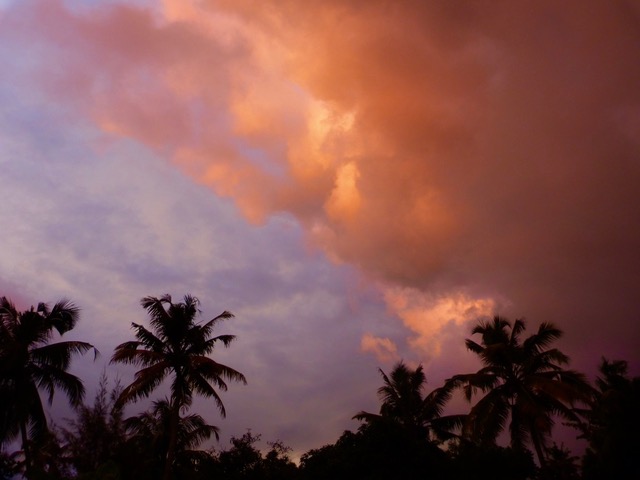 As always Sethu Das arrives one day before the Wellbeing Camp starts, he brings organic rice and fresh organic vegetables.
This time he is also accompanied by Manisha Pinge, an old friend of him. She will volunteer for the coming days, supporting Sethu with the paper works of the patients registrations. 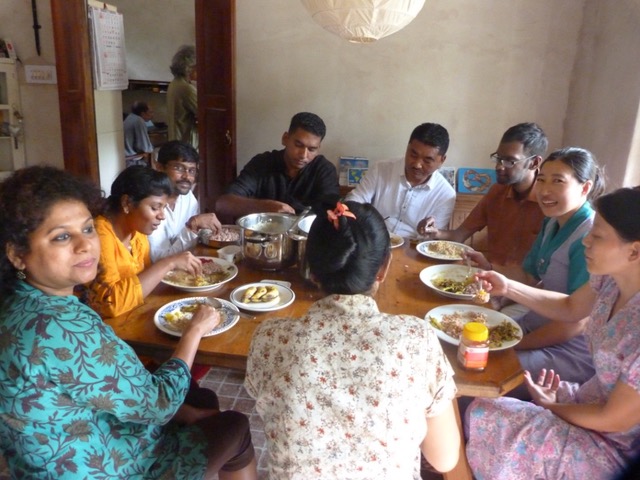 Next early morning the tibetan team arrives with the night train from Bangalore: Dr. Dorjee Rapten Neshar, Tenzin Nangsel, Yeshi Chodon and the young Tibetan doctor Tsering Dolma.
Also Dr. Jyothi S. from the Kerala mountains has come. She has studied Siddha Medicine, a Dravidian medicinal system which is considered as one of the oldest medical systems in the world.
The two young lady doctors Tsering Dolma and Jyothi S. will both join the consultation beside Dr. Dorjee during the Wellbeing Camp. 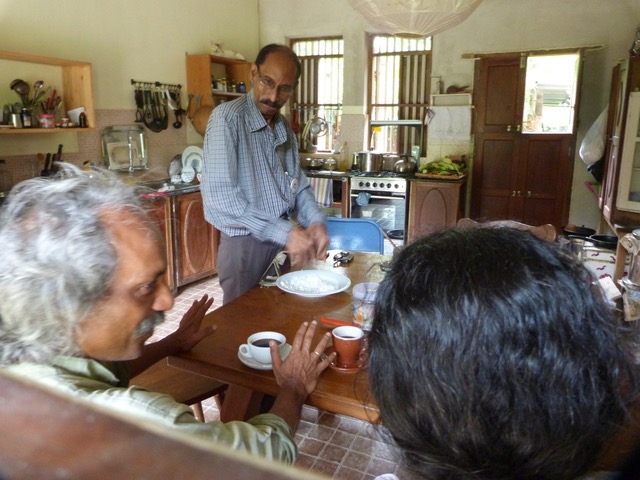 We have a new kitchen helper: Suresh Babu!
Besides his briefings with interested patients, he assists Alexander in the kitchen, since we have no cook anymore. 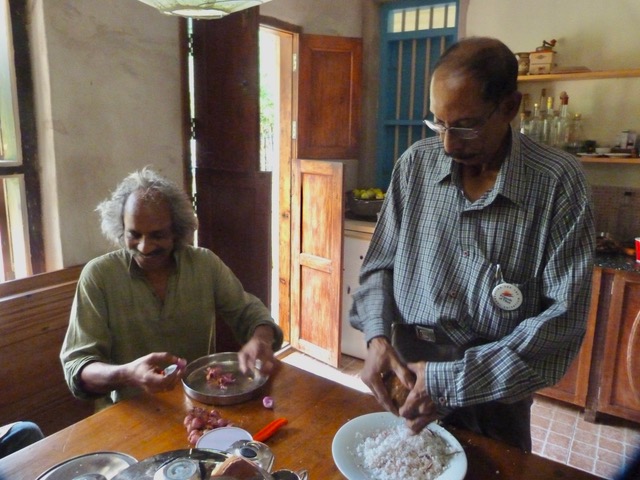 Our old friend Shihab, who is the father of Dr. Jyothi S. and inspired her a lot for her studies, spends the first day with us, which provides plenty of time for good long talks. 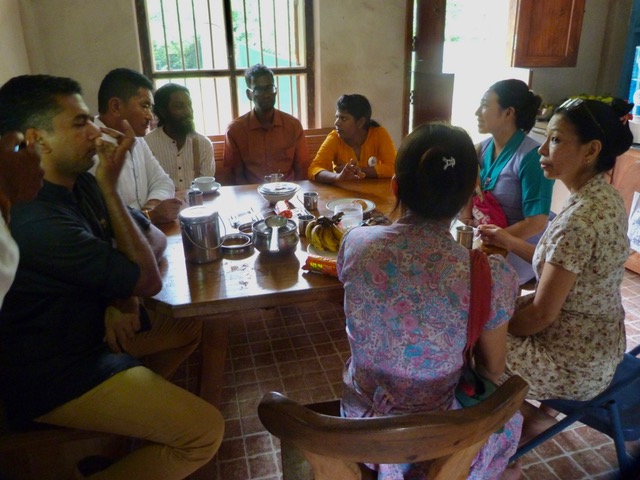 And what a surprise, that Eldtho Mathew could find some time for a visit. He is a long time campaigner for Friends of Tibet and the Wellbeing program, doing a lot of needful preparation work for each Wellbeing Camp. 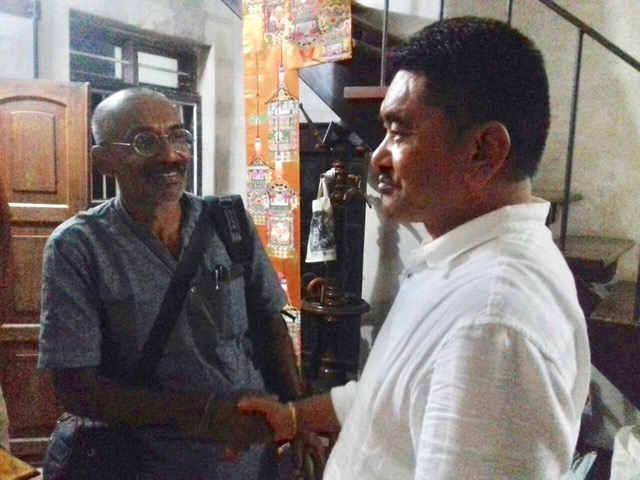 On the first day of the Wellbeing Camp we have another Suresh Babu, but as a volunteer. He came together with Sanju, who volunteers often, and enjoys the group a lot. 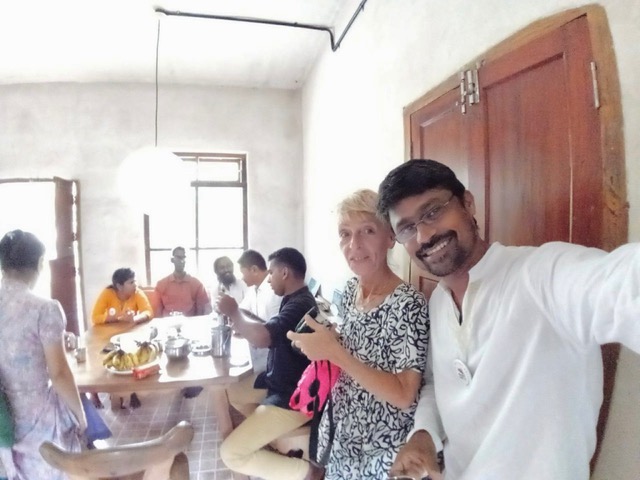 After the tea and lunch breaks consultations go on … 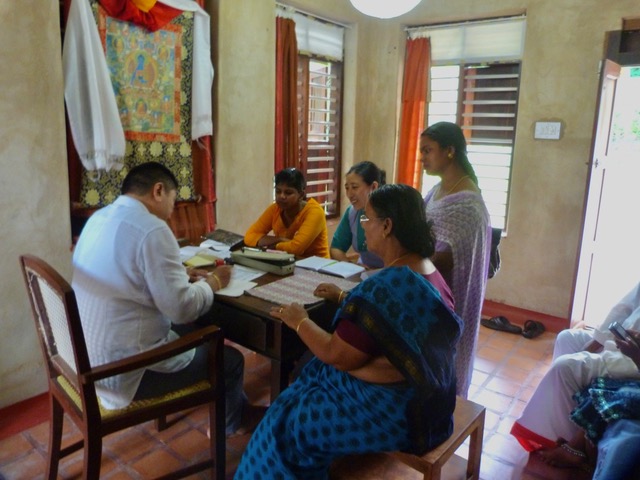 Dr. Jyothi S. is also doing the translations for the patients who not speak English. 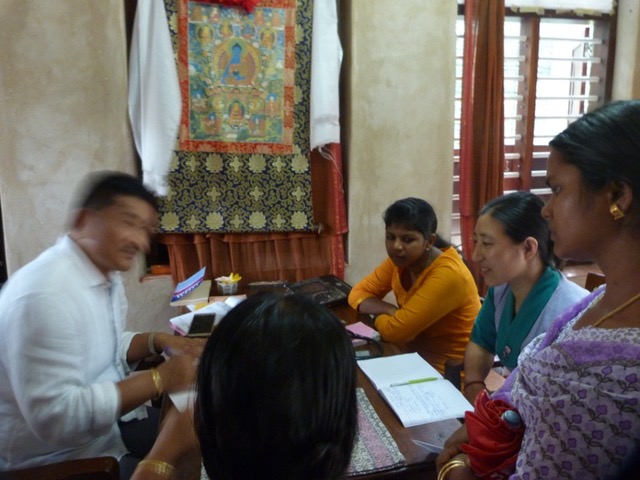 Our friend, who has cancer and was giving up by the academic doctors in hospitals, is brought with the ambulance as last time … 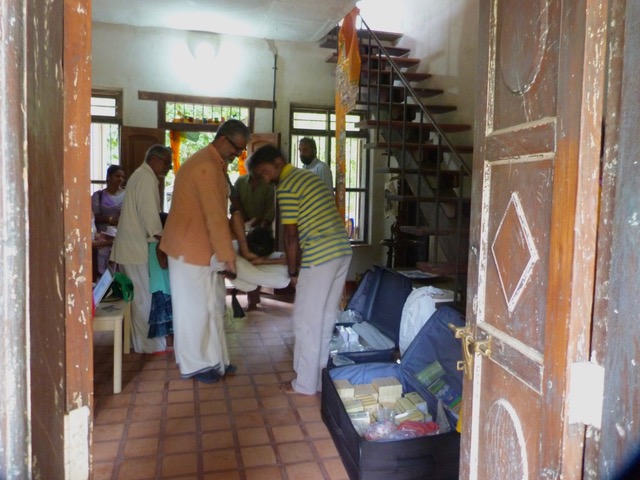 His condition slowly improves, the tumor became quite smaller … it needs patience …
I had dreamt last year already, that he will walk again one day … 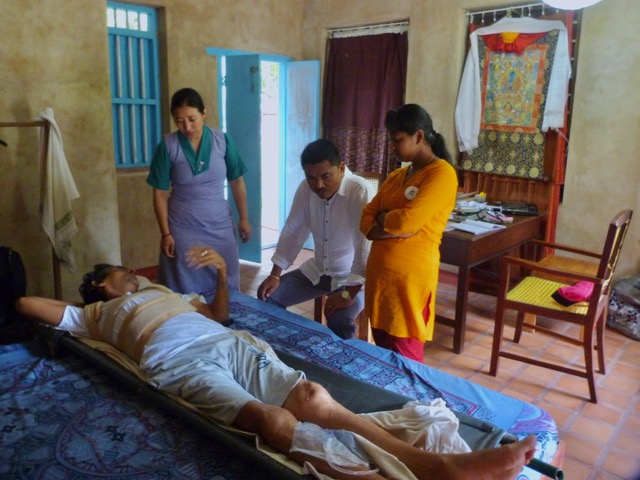 Since he was not on his legs for over a year, his muscles have to be build up again … 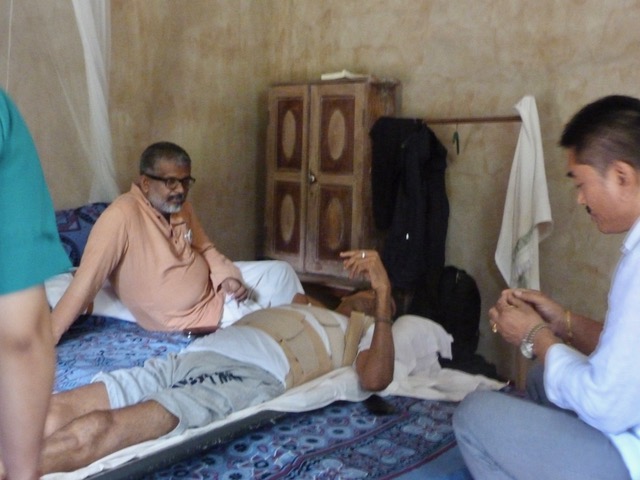 While Dr. Dorjee and his assistants discuss with the patient further steps, Simba takes care of the doctor’s desk! 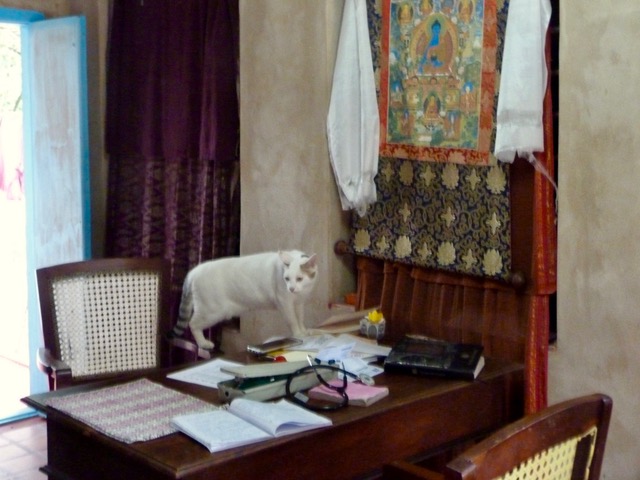 We got new stickers! Which all campaigners and volunteers wear during the Wellbeing Camp. 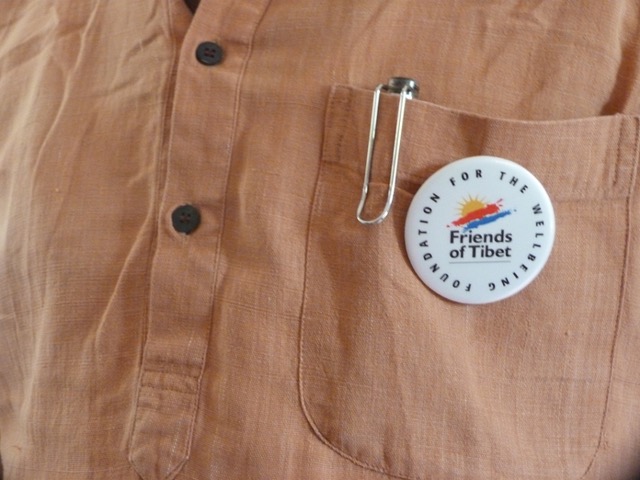 Often patients seek help from Tibetan Medicine as a last hope, after running through all kind of academic medicine. They bring their clinical results, which are studied by Dr. Dorjee for a better understanding of the whole case. 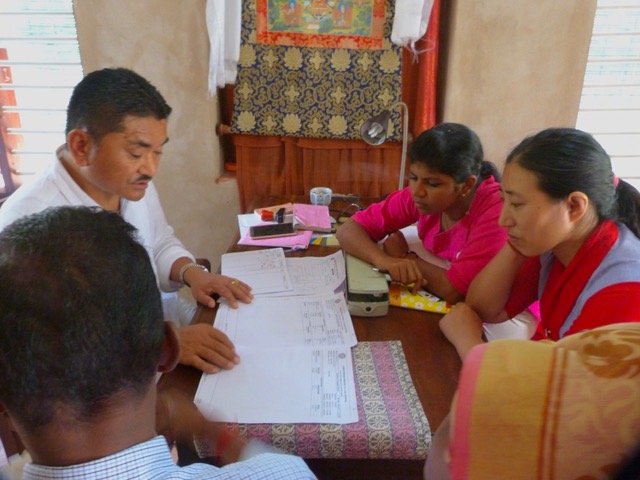 During the Wellbeing Camp my stitching room turns into an office room – it lays between entrance hall and kitchen. Here Suresh is giving briefings to the patients. While no briefings take place, Manisha can use my stitching table to do her work … 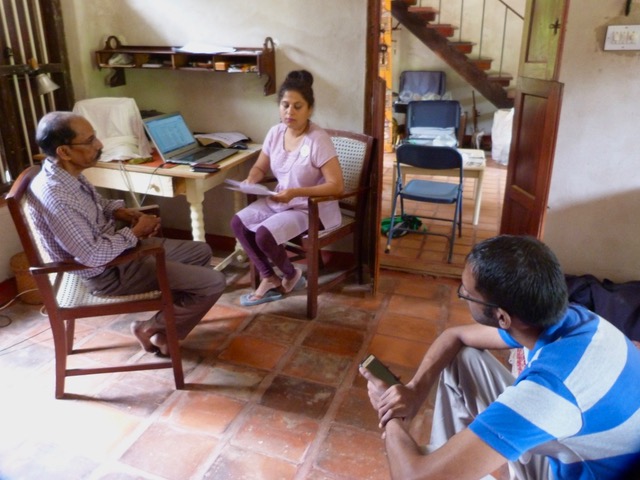 On one afternoon, Yazin T. Azad makes an interview with Dr. Jyothi S. 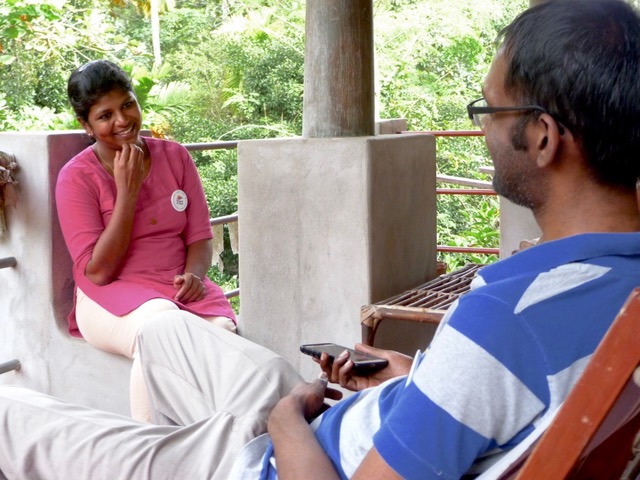 Since her knowledge comes from Siddha medicine, she was curious to experience the practice and understanding of Tibetan doctors – in her study she has learnt pulse diagnose too … 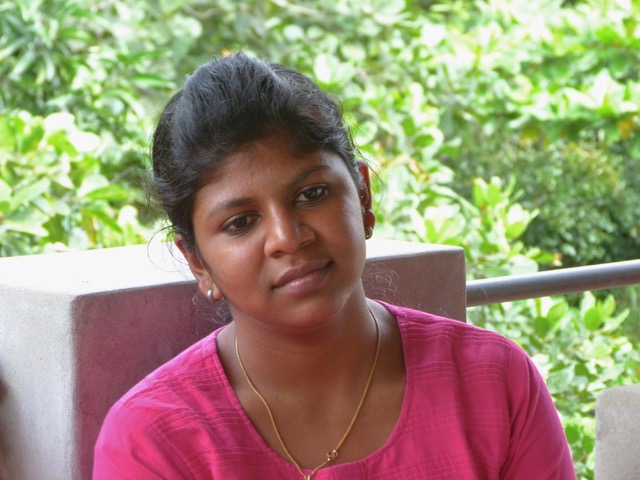 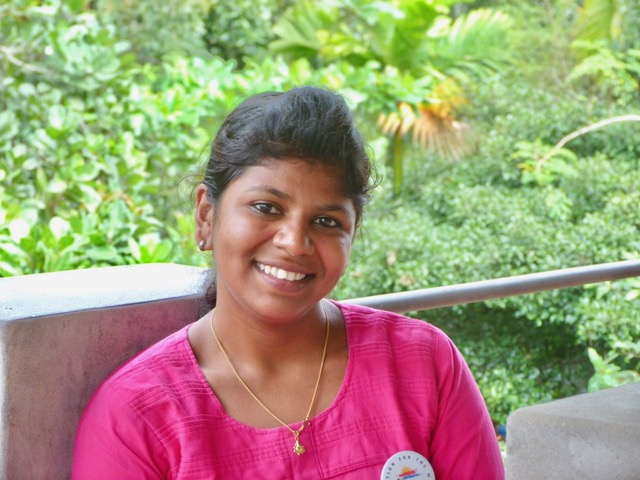 Our last moments together, before Jyothi has to go back to Cochin … During sunset the Tibetan team will leave for the train back to Bangalore … Manisha and Sethu will stay one more night, leaving next morning … 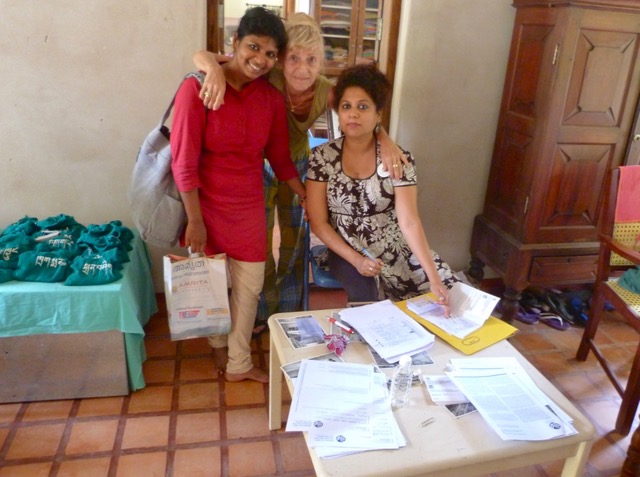 We will see us again … Auf Wiedersehen … Pinnekanam …

The 58th Wellbeing Tibetan Medical Camp organised jointly by ‘Friends of Tibet Foundation for the Wellbeing’ and ‘Men-Tsee-Khang’, the Tibetan Medical and Astrological Institute of His Holiness the Dalai Lama was held from Sept. 13-15, 2017 (Wed-Fri). The venue for the medical camp is Centre for Social & Political Art (CSPA), Sylviander Land, Chettikad Beach Road, Alappuzha, Kerala, India.

Posted by Sylviander House at 08:03 No comments: