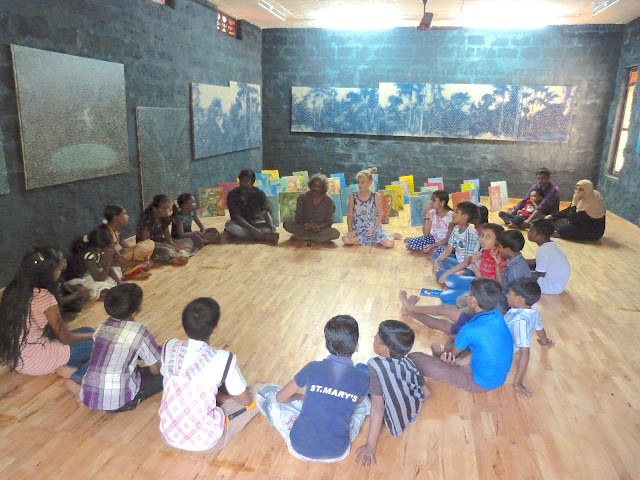 Since the opening of Sylviander House Art Museum on December 21, 2012 with Alexander‘s exhibition of paintings »Water, the Mirror of the World«, a lot of visitors came to see the paintings and installations. What really surprised us were the presence of enthusiastic children from our neighbourhood. Several of them came and again and brought other kids to see the work. Some of them also liked to play on the 100 year-old piano, we brought all the way from Germany which now has its own place in one corner of the Art Museum at Alappuzha. This incredible, unexpected enthusiasm and interest of the kids inspired us to develop an idea to start a dialogue with children from the village. When asked if they were interested in this project they all kids said "yes" and they smiled. We fixed the date for Sunday, January 20. 2013, 4 in the evening. The kids agreed to inform others as well.
On Sunday morning when Alexander was on his way to the village market he met many kids and parents who talked about the event in the afternoon. A boy came in the morning and one of the regular visitors   apologised for not being able to participate in the class, because his parents wanted to take him for a festival at the nearby church. The group of kids arrived before time, some with their school exercise books and pens. About 21 kids had turned up, in the age of 2 years upto 14 years along with two mothers, two artists. They joined Alexander, me and Dorothea, a German friend of ours staying at Sylviander House for three weeks photographing the landscape and people. Lila amma, who helps us keeping the house clean was curiously watching the gathering from the door entrance who told us next day morning how much she liked this event. After everybody told their names, name of their school and standard they study, the children were asked for their favorite painting of the exhibition. Mostly they liked the paintings »Mothertree« and »Kids laying and watching the rain«.
Since the theme of the exhibition is "water", the topic of our first meeting was also - Water. What could be the reason the artist painted so many raindrops over his paintings? That makes the beauty, the kids answered. After a short introduction of Alexander, about the idea of such a gathering at the Art Museum, I spoke to them about the phenomenon of water in English while Alexander translating into Malayalam.
How to say things in simple words to make children understand the complexity of water? Some already knew that a human body consists of 70-80% water. But none had ever heard of scientists examining water and being very astonished about the different results of their experiments. How is it possible? The scientists had put the water of the same source under their microscope. Then they understood, that water communicates. In their experiments it had reflected the actual mood of the person, who examined it. Being able to change any moment, water never remains same. That means, our body water is in resonance with every water in the outside even with raindrops, rivers and lakes, with the brooks and ponds as we have here a lot in Chettikad also. Nowadays all the ‘Pozhi‘, the small canals, and most of the ponds nearby are badly polluted with waste materials. What could this mean to the 80% water of our body? Probably the informative is sadness. Who wants to be sad? Nobody. Who wants to be happy? All hands were up.
Another interesting view of water‘s soul is the work of Emoto. The Japanese scientist developed a technique to take photographs of frozen water crystals. He takes water from different places like springs in the mountain or from rivers in big cities to make the differences visible. He also makes the energy of words visible by filling the same water in several bottles, each labeled with different words as love, thanks, hate, greed. Or he exposes the bottled water to loud noise or fine music… Photographed after one day, the pictures show it clearly. The water labeled with negative words or exposed to painful noise showed only very poor crystals or none like the water from big cities, but the water labeled with positive words or exposed to nice music created such beautiful rich crystals that everybody who sees the figures must love them. That means, every thought we have or every word we say to others or get to hear from others has an effect, can make the water of our body cells happy, sad or angry. With this awareness, it is easy to imagine the mood and constitution of the water in the landscapes of our surrounding.
With the promise to show the pictures of the water crystals of Emoto to the children next time to the gallery, we shifted our topic back to paintings, which were seen now with different eyes. After some questions and answers Dorothea played on her guitar and sang a water-song  »… all life comes from the sea …« to the gathering. Few of the children dared to join us with singing but all clapped their hands which showed their genuine enthusiasm. Three of them presented Sylvie with their drawings with the title - "For Sylvie Aunty!"
What a joy!
It seemed everybody wanted to continue with the session. So we fixed the date for the next one - Sunday February 17, 2013 at 4pm.
(Written by Sylvie Bantle) 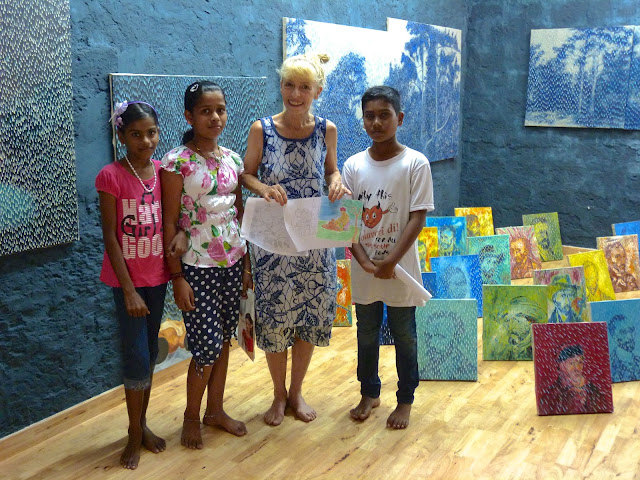 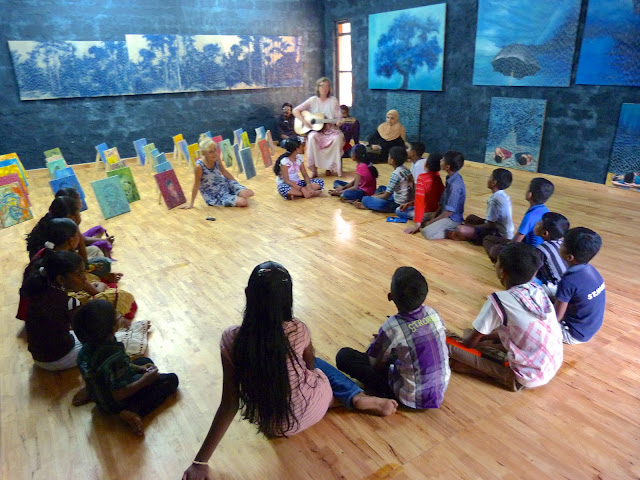 Posted by Sylviander House at 10:49 No comments:

HAPPY NEW YEAR TO EVERYBODY 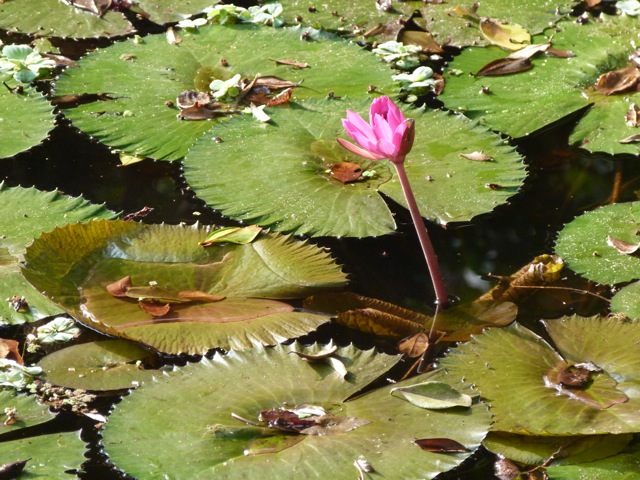 Posted by Sylviander House at 08:13 No comments: