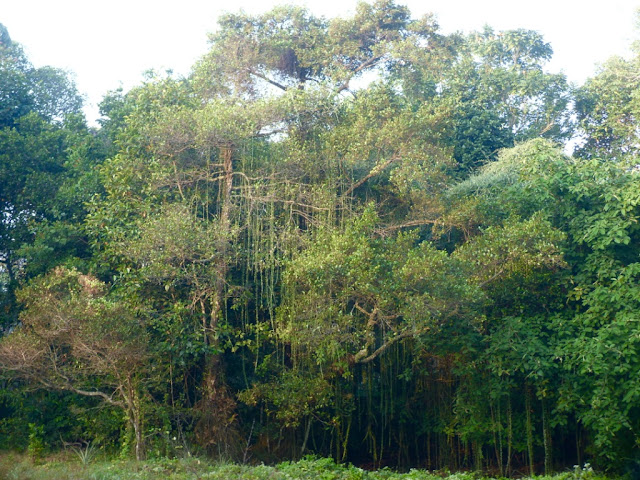 Morning magic light charms the divine trees in Sylvianderland as it happens so many days of the year to bless our mind … These are always the moments, when the Tibetan team arrives after a night train journey from Bangalore to Aleppey for the Wellbeing Camp … 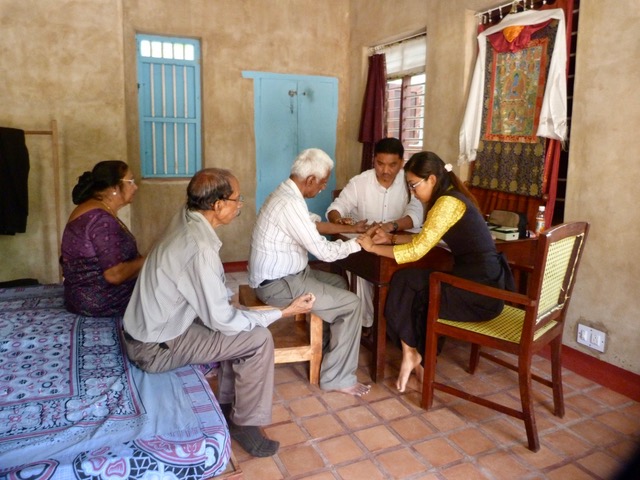 The 60th Wellbeing Tibetan Medical Camp was the 1st of the new year 2018. This time the young doctor Tsering Youdon had joined the team to assist Dr. Dorjee during the consultations. When needed, Suresh Babu was translating to make the communication possible between Dr. Dorjee and the patients. 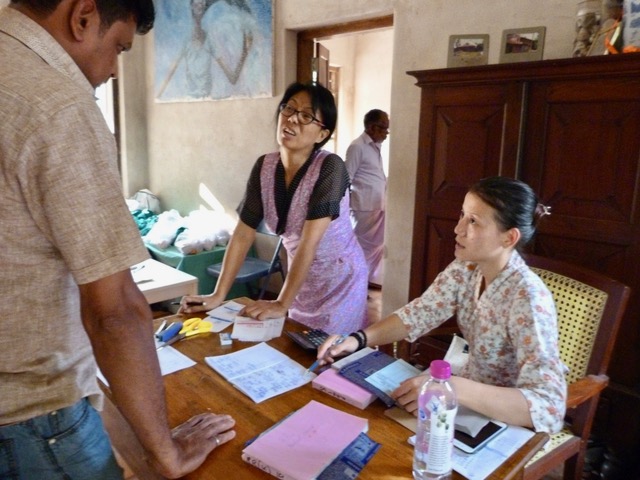 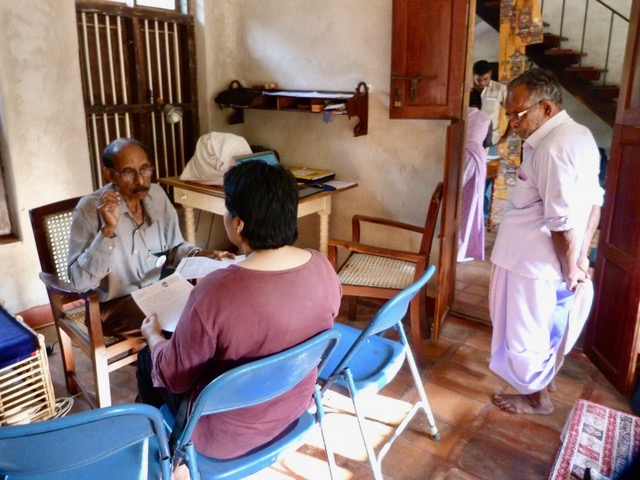 When Suresh was not needed as translator for the consultations, as always he was very committed to briefing patients, interested for a better comprehension in healing. These conversations are in Malayalam and sometimes I regret not to understand much, when I observe these long talks. 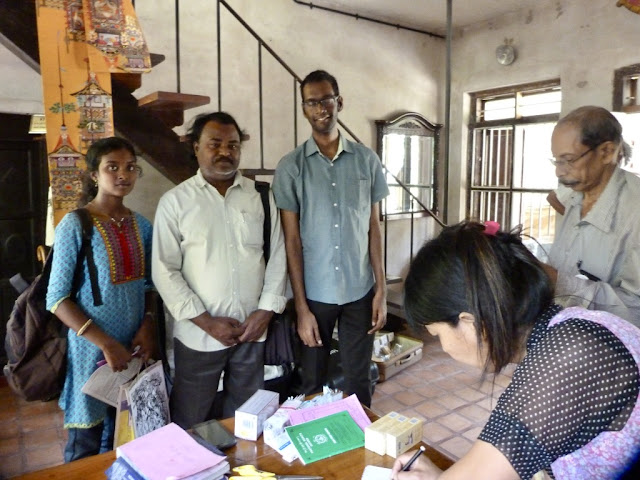 Yazin T Azad who always joins one day at the Wellbeing Camp had an interview with a patient with his daughter about their experience with Tibetan medicine. 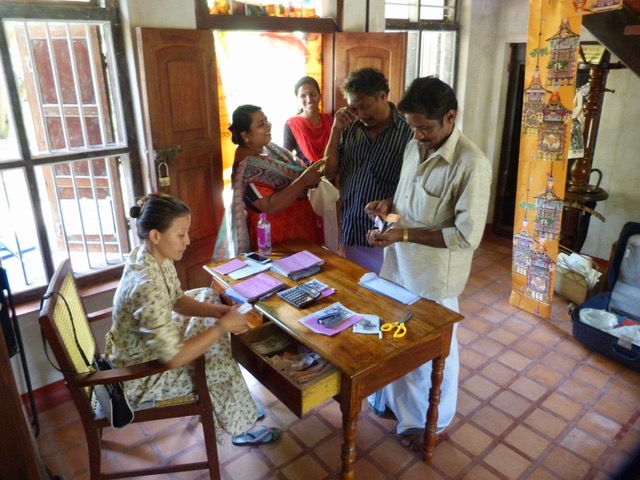 I always enjoy this peaceful atmosphere during these Wellbeing Camps, even so many patients are coming in these 3 days. Thanks to the well planned schedules by Sethu Das and Eldtho Matthew, never any rush is to feel, never any queues to see. Mostly few patients only are waiting on chairs under the cashew nut tree in front of the house, which looks really picturesque, some others wait on the terrace to the garden, from were we often can here the sea nearby. 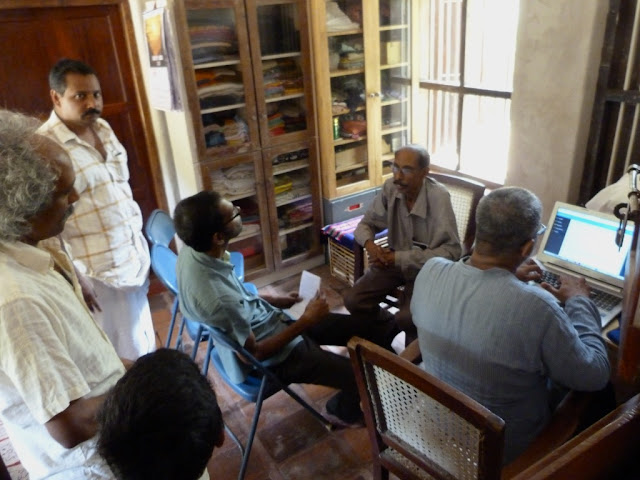 My small stitching room lays between the kitchen and the entrance hall. During the Wellbeing Camp it is transformed to the office for Sethu and to the briefing room for Suresh – sometimes it happens to become a meeting spot for discussions. 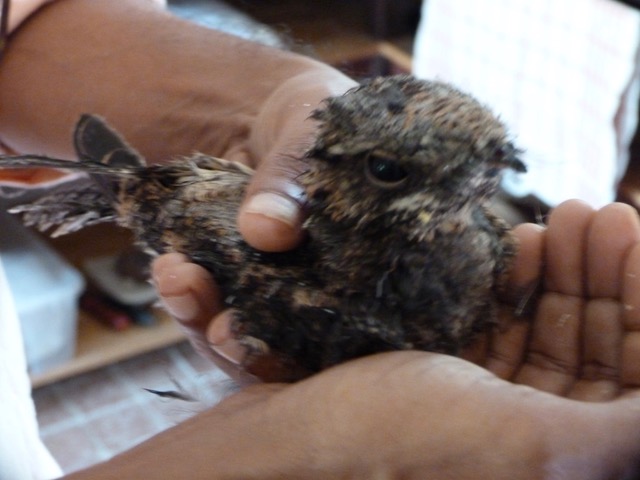 On one day occurred something never happened before. Alexander and me were in the kitchen, having just finished the preparations for lunch, when a strange baby bird flew in, performing an awkward style and landing on the floor, being quite confused. Same with us. We took it carefully and puzzled about what it was – may be an eagle chick? While Alexander was holding it, I tried to feed it with a bit mashed potatoes and to give some water with the filler, which was not easy. Luckily our cats were not aware of this incident! We informed Jos one of our helpful neighbor who has some experience and a cage at home. He wanted to care for this poor creature.
Meanwhile we got to know, that the little bird is fine, eating small fish and growing nicely. But still confused we presume, that it is not an eagle … 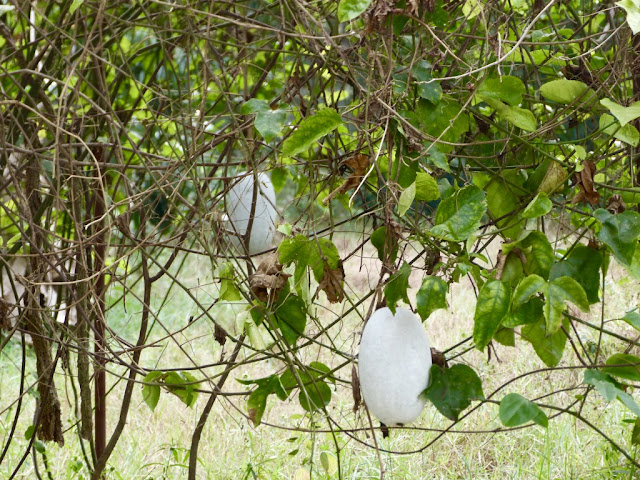 On the structure for passionfruit in our garden now are growing »Neykumbalam« too, an old sort of pumpkin from Kerala with great healing power. It happened naturally, since we put the kitchen waste around the roots of the passionfruit plants … and after sometimes this wonderful vegetable appears … 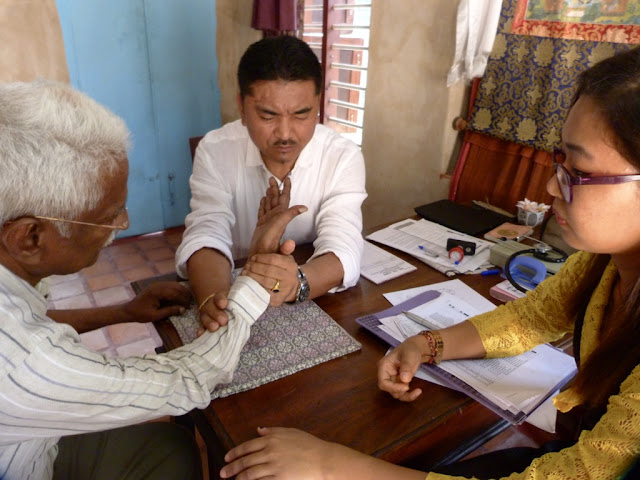 To support the precious work of Dr. Dorjee, of his assistant doctors and the team, we cook healthy vegetarian meals for them – the healing »Neykumbalam« is often part of the menu, freshly plucked near Dr. Dorjee’s room in the garden, a gift from mother nature …

The 60th Wellbeing Tibetan Medical Camp organised jointly by ‘Friends of Tibet Foundation for the Wellbeing’ and ‘Men-Tsee-Khang’, the Tibetan Medical and Astrological Institute of His Holiness the Dalai Lama was held from Jan. 10-12, 2018 (Wed-Fri). The venue for the medical camp is Centre for Social & Political Art (CSPA), Sylviander Land, Chettikad Beach Road, Alappuzha, Kerala, India.