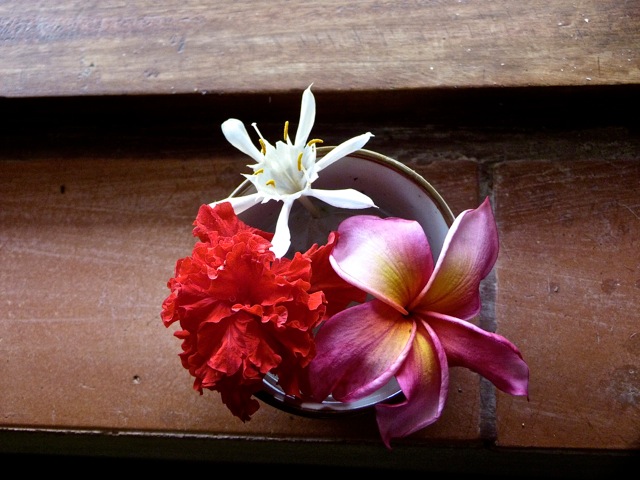 Dr. Dorjee Rapten has asked me for some flowers for the morning prayer, which is a daily ritual before starting the consultation. I stepped out in our big garden, where always something is blossoming, and found these three beauties for the Medicine Buddha.
On Youtube: Tibetan Morning Prayer for the Medicine Buddha:
https://youtu.be/mM9dfvm_4PI 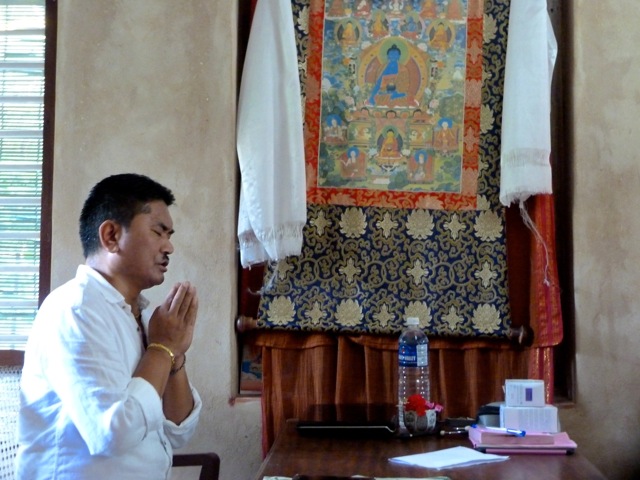 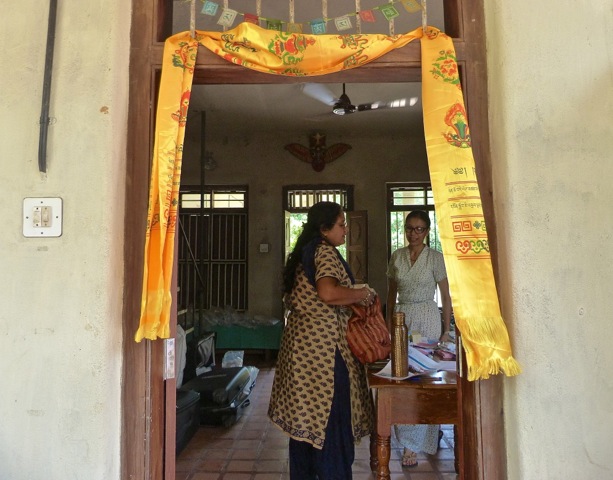 A couple from Germany, Jeannine and Rolf, had arrived two days before with the plan to care Sylviander House and our three cats during our travel to Germany. They both also consulted Dr. Dorjee. 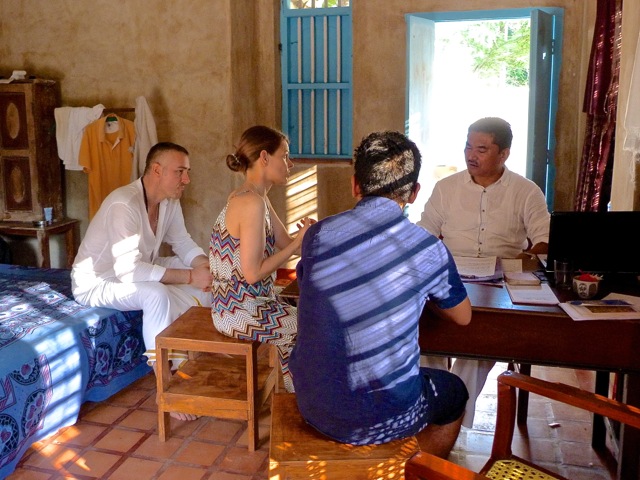 Rolf, an ayurvedic practitioner interested in the work of the tibetan doctors, later joined the consultations with the patients. 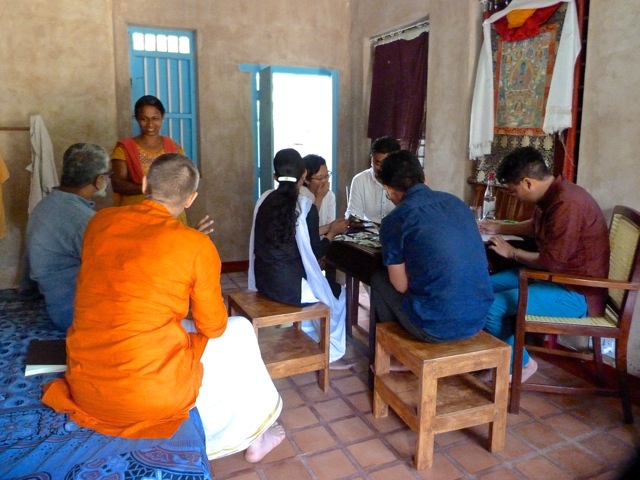 Sometimes he will offer reiki treatment to patients. 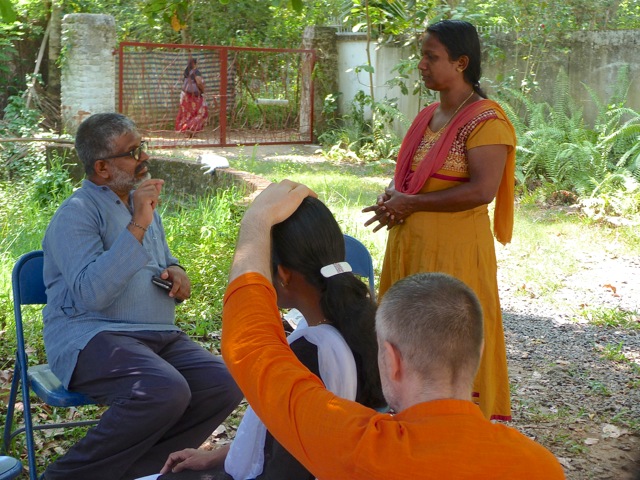 On Thursday the doctor Rangjung Dolma arrived to learn from Dr. Dorjee, sitting beside him during the consultations. 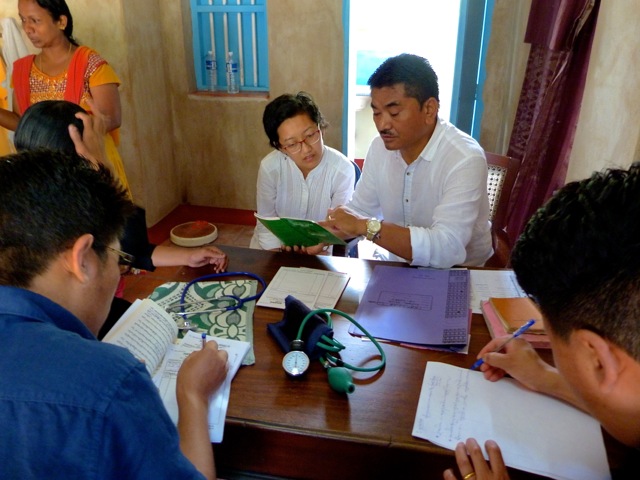 I am happy to meet again my dear friend Mrinalini, who had come to consult the doctors and to get her medicines. 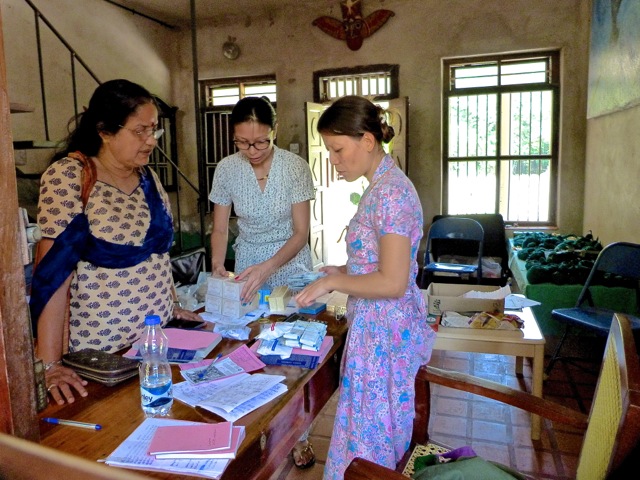 We had some time to spend, sitting in the kitchen having snacks and talk … 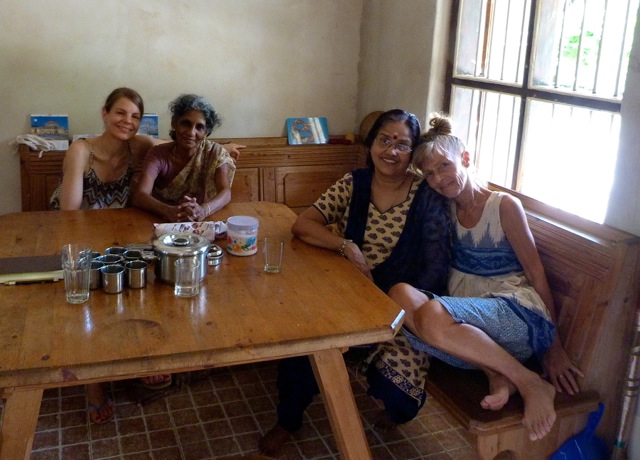 … later accompanied by the tibetan team during the tea break. 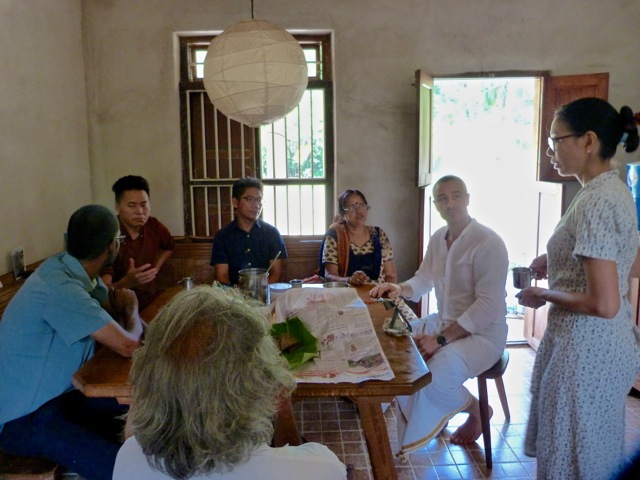 Of course Rolf took the chance to discuss with Mrinalini healing treatments, since Mrinalini works in a nature cure clinic. 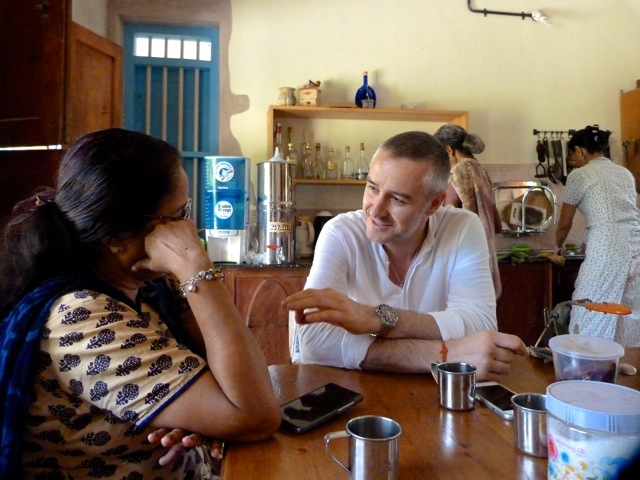 On this Wellbeing Camp three ‘guest learner‘ joined the consultations in Dr. Dorjee‘s Room, listening to his diagnosis and advises to the patients. 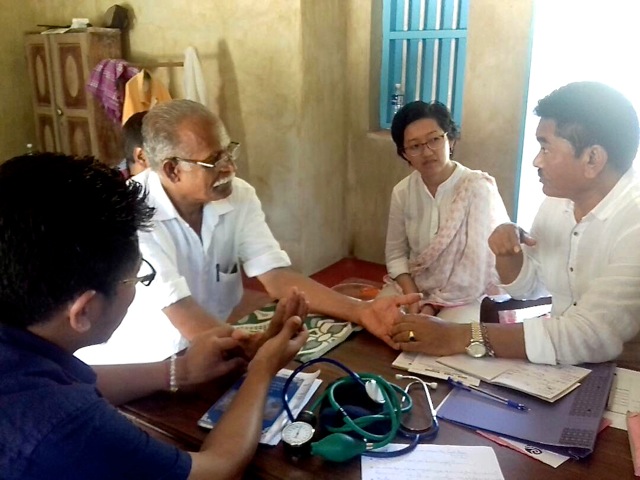 We were happily surprised to see Suresh Babu being back to the Friendsoftibet team after a long time! 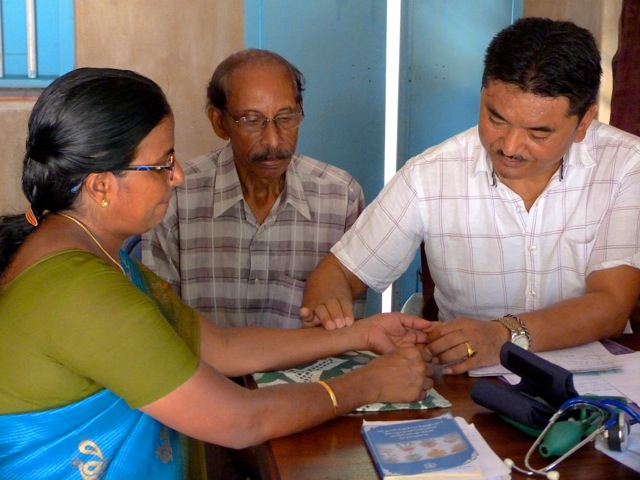 He is a good english translater, having a great understanding in buddhism, in natural medicines and healing therapies. 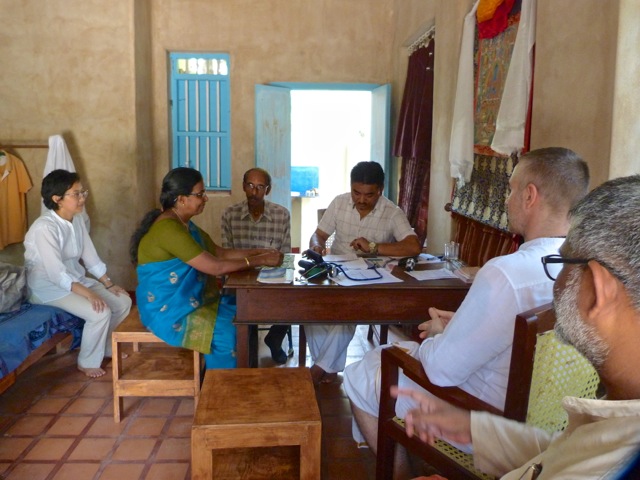 Since he will be with us from now on at each coming Wellbeing Camp, I am looking forward to an interesting person, having interesting conversations with … 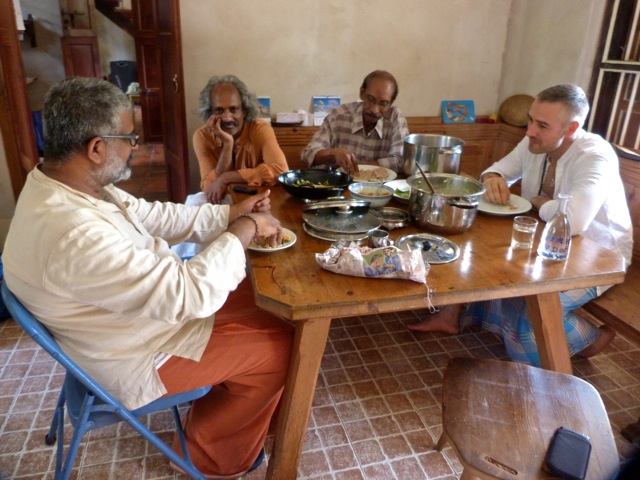 I really had missed our discussions! 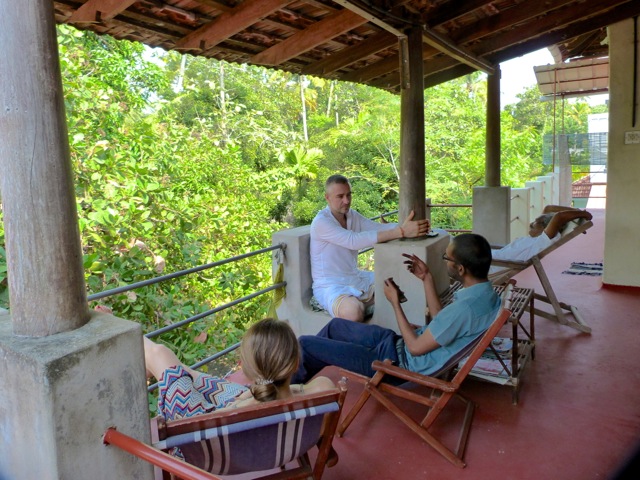 On one afternoon during the Wellbeing Camp, Yazin T Azad had an interview with Rolf, while I took some pictures. We were sitting in the shadow of the east verandah or morning-tea veranda, to where always reaches a cooling breeze from the sea – traveling through the many coconut palmes, mango-, cashew-, jackfruit-trees, crossing then our ‘Kavu‘, our biotope of wild nature as a sacret spot on Sylvianderland, flying over the pond … 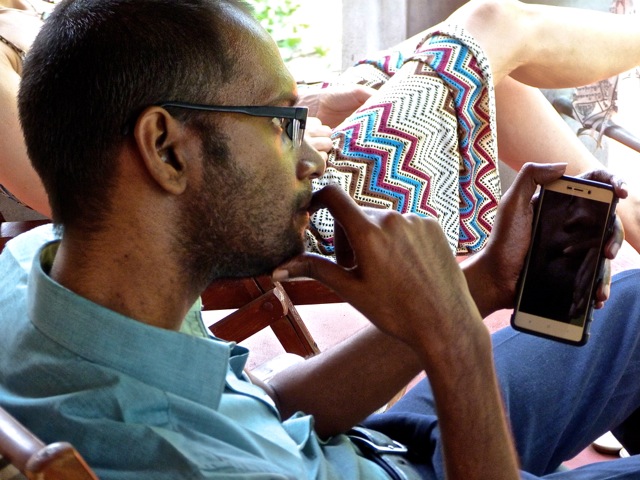 To read the report »The One Who Sold His Ferrari To Be A Monk« by Yazin T Azad:
http://www.friendsoftibet.org/wellbeing/reports/wellbeing_may_2017.html 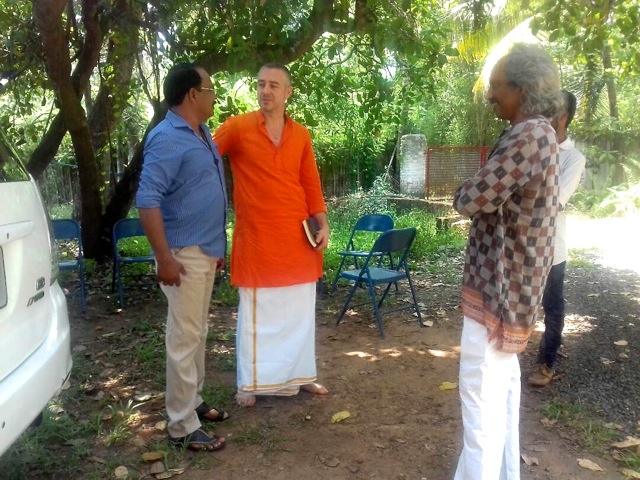 One day, Alexander‘s elder brother Johny came to get a check up by the tibetan doctors, and afterwards Alexander showed him some yoga exercises by practicing together. 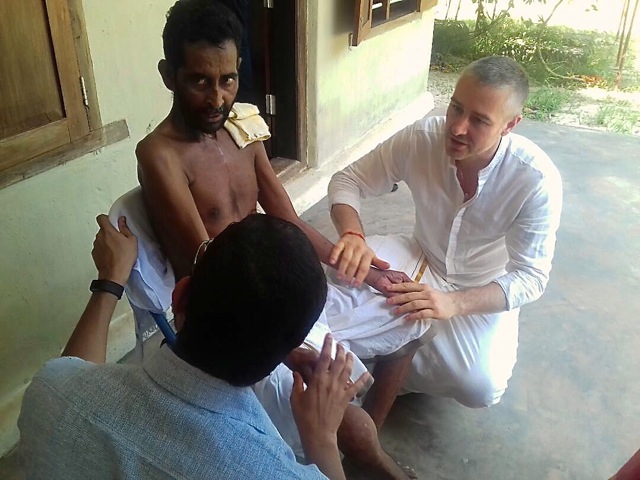 Finally on the last day, just before everybody would leave to different destinations, we called for a group picture … 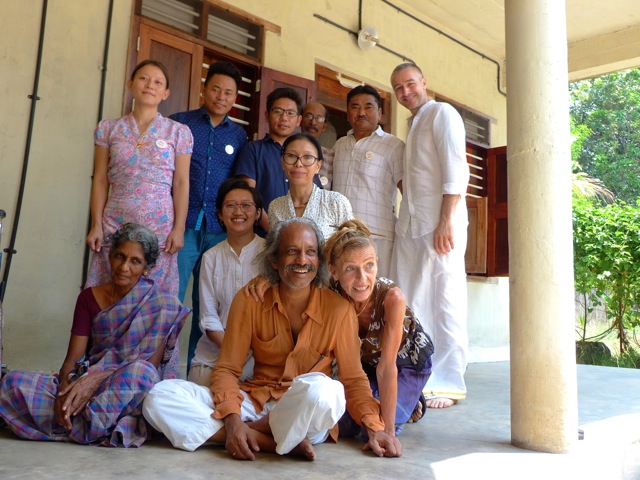 It took quite some time until all had gathered, until we are nearly complete … 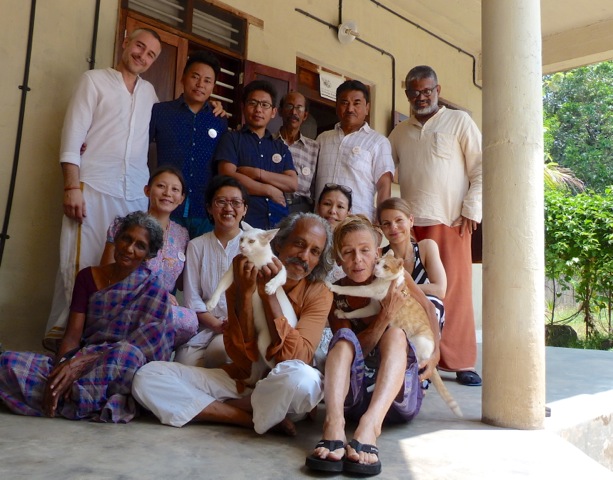 … only Moojoo was not in the mood for a picture!

The 56th Wellbeing Tibetan Medical Camp organised jointly by ‘Friends of Tibet Foundation for the Wellbeing’ and ‘Men-Tsee-Khang’, the Tibetan Medical and Astrological Institute of His Holiness the Dalai Lama will be held from May 3 - 5, 2017 (Wed-Fri). The venue for the medical camp is Centre for Social & Political Art (CSPA), Sylviander Land, Chettikad Beach Road, Alappuzha, Kerala, India.

Posted by Sylviander House at 08:09 No comments: